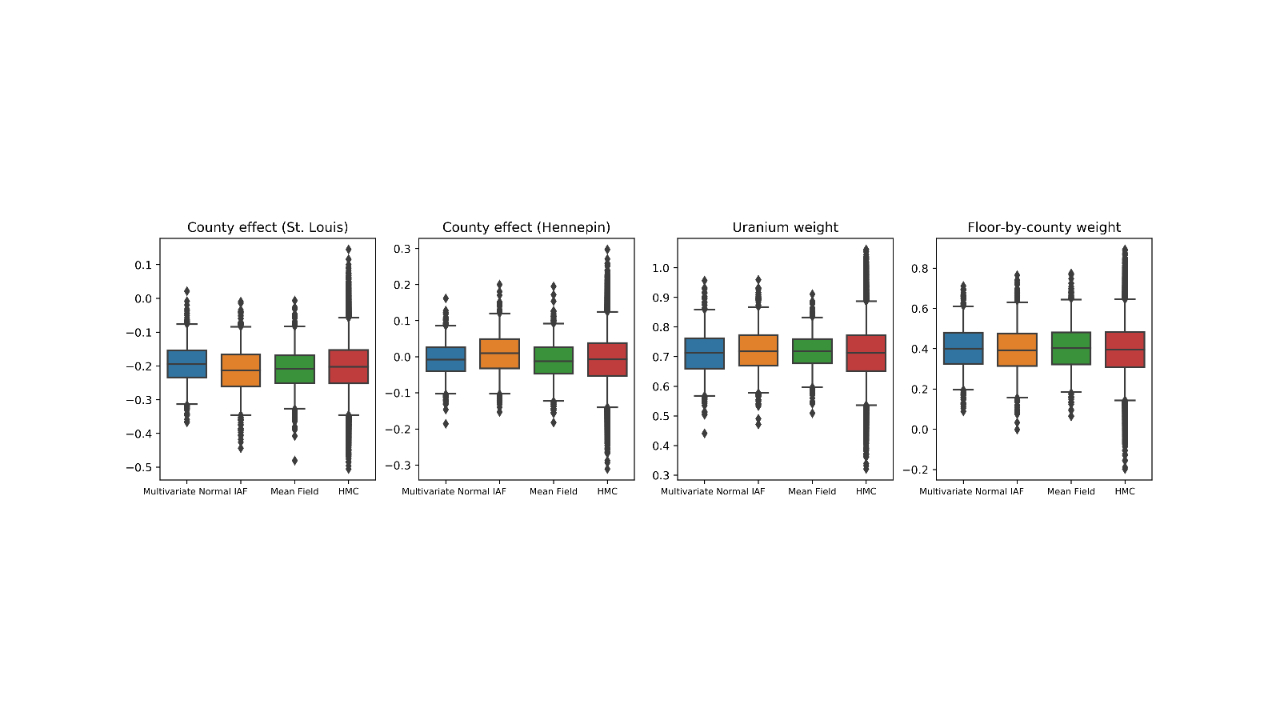 In this post, we introduce new tools for variational inference with joint distributions in TensorFlow Probability, and show how to use them to estimate Bayesian credible intervals for weights in a regression model.

Variational Inference (VI) casts approximate Bayesian inference as an optimization problem and seeks a ‘surrogate’ posterior distribution that minimizes the KL divergence with the true posterior. Gradient-based VI is often faster than MCMC methods, composes naturally with optimization of model parameters, and provides a lower bound on model evidence that can be used directly for model comparison, convergence diagnosis, and composable inference.

TensorFlow Probability (TFP) offers tools for fast, flexible, and scalable VI that fit naturally into the TFP stack. These tools enable the construction of surrogate posteriors with covariance structures induced by linear transformations or normalizing flows.

VI can be used to estimate Bayesian credible intervals for parameters of a regression model to estimate the effects of various treatments or observed features on an outcome of interest. Credible intervals bound the values of an unobserved parameter with a certain probability, according to the posterior distribution of the parameter conditioned on observed data and given an assumption on the parameter’s prior distribution.

In this post, we demonstrate how to use VI to obtain credible intervals for parameters of a Bayesian linear regression model for radon levels measured in homes (using Gelman et al.’s (2007) Radon dataset; see similar examples in Stan). We demonstrate how TFP JointDistributions combine with bijectors to build and fit two types of expressive surrogate posteriors:

You can follow along and see all the details in this Google Colab.

Radon is a radioactive gas that enters homes through contact points with the ground. It is a carcinogen that is the primary cause of lung cancer in non-smokers. Radon levels vary greatly from household to household.

The EPA did a study of radon levels in 80,000 houses. Two important predictors are:

Predicting radon levels in houses grouped by county is a classic problem in Bayesian hierarchical modeling, introduced by Gelman and Hill (2006). We are interested in credible intervals for the effect of location (county) on the radon level of houses in Minnesota. In order to isolate this effect, the effects of floor and uranium level are also included in the model. Additionally, we will incorporate a contextual effect corresponding to the mean floor on which the measurement was taken, by county, so that if there is variation among counties of the floor on which the measurements were taken, this is not attributed to the county effect.

The regression model is specified as follows: 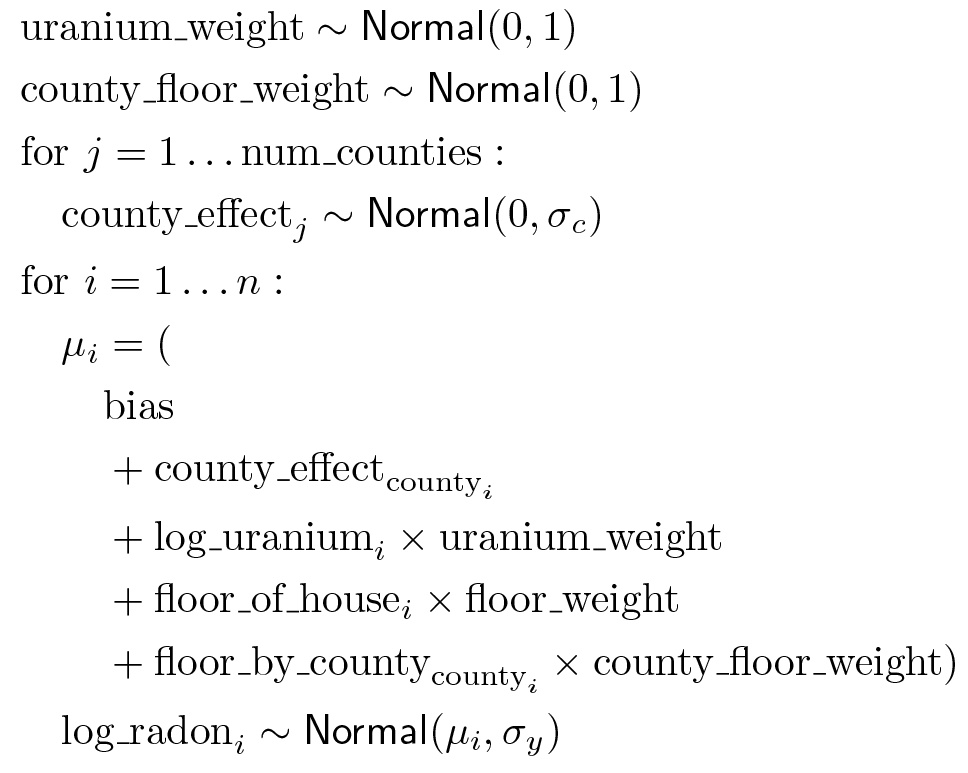 in which i indexes the observations and countyi is the county in which the ith observation was taken.

We use a county-level random effect to capture geographical variation. The parameters uranium_weight and county_floor_weight are modeled probabilistically, and floor_weight and the constant bias are deterministic. These modeling choices are largely arbitrary, and are made for the purpose of demonstrating VI on a probabilistic model of reasonable complexity. For a more thorough discussion of multilevel modeling with fixed and random effects in TFP, using the radon dataset, see Multilevel Modeling Primer and Fitting Generalized Linear Mixed-effects Models Using Variational Inference.

The full code for this example is available on Github.

Variables are defined for the deterministic parameters and the Normal distribution scale parameters, with the latter constrained to be positive.

We specify the probabilistic graphical model for the regression as a TFP JointDistribution.

We pin log_radon to the observed radon data to model the unnormalized posterior.

VI is then characterized by:

Since the bound holds for all q, it is obviously tightest for:

Regarding terminology, we call

ω* represents the maximum-likelihood values of the deterministic parameters on the VI loss. See this survey for more information on variational inference.

Next we estimate the posterior distributions of the parameters using VI with two different types of surrogate posteriors:

To build this surrogate posterior, a trainable linear operator is used to induce correlation among the components of the posterior.

We begin by constructing a base distribution with vector-valued standard Normal components, with sizes equal to the sizes of the corresponding prior components. The components are vector-valued so they can be transformed by the linear operator.

Applying this bijector to the base distribution results in a multivariate Normal distribution with mean 0 and (Cholesky-factored) covariance equal to the lower-triangular block matrix.

The resulting multivariate Normal distribution, obtained by transforming the standard Normal distribution with the scale and location bijectors, must be reshaped and restructured to match the prior, and finally constrained to the support of the prior.

Now, put it all together — chain the trainable bijectors together and apply them to the base standard Normal distribution to construct the surrogate posterior.

Since the trained surrogate posterior is a TFP distribution, we can take samples from it and process them to produce posterior credible intervals for the parameters.

The box-and-whiskers plots below show 50% and 95% credible intervals for the county effect of the two largest counties and the regression weights on soil uranium measurements and mean floor by county. The posterior credible intervals for county effects indicate that location in St. Louis county is associated with lower radon levels, after accounting for other variables, and that the effect of location in Hennepin county is near neutral.

Posterior credible intervals on the regression weights show that higher levels of soil uranium are associated with higher radon levels, and counties where measurements were taken on higher floors (likely because the house didn’t have a basement) tend to have higher levels of radon, which could relate to soil properties and their effect on the type of structures built.

The (deterministic) coefficient of floor is -0.7, indicating that lower floors have higher radon levels, as expected.

Inverse autoregressive flows (IAFs) are normalizing flows that use neural networks to capture complex, nonlinear dependencies among components of the distribution. Next we build an IAF surrogate posterior to see whether this higher-capacity, more flexible model outperforms the constrained multivariate Normal.

We begin by building a standard Normal distribution with vector event shape, of length equal to the total number of degrees of freedom in the posterior.

The IAF bijectors are chained together with other bijectors to build a surrogate posterior with the same event shape and support as the prior.

In this case, the mean field surrogate posterior gives similar results to the more expressive surrogate posteriors, indicating that this simpler model may be adequate for the inference task. As a “ground truth”, we also take samples with Hamiltonian Monte Carlo (see the Colab for the full example). All three surrogate posteriors produced credible intervals that are visually similar to the HMC samples, though sometimes under-dispersed due to the effect of the ELBO loss, as is common in VI.

Check out our code, documentation, and further examples on the TFP home page.