In the sea of virtual exhibitions that have popped up over the last year, the NVIDIA AI Art Gallery offers a fresh combination of incredible visual art, musical experiences and poetry, highlighting the narrative of an emerging art form based on AI technology.

The online exhibit — part of NVIDIA’s GTC event — will feature 13 standout artists from around the world who are pioneering the use of AI within their respective fields in music, visual arts and poetry.

The exhibit complements what has become the world’s premier AI conference. GTC, running April 12-16, bringing together researchers from industry and academia, startups and Fortune 500 companies.

Unlike other virtual galleries that only depict the artist’s final piece, the AI Art Gallery is a uniquely immersive experience.  Visitors can explore each artist’s creative process, the technologies used to bring their creations to life, and the finished works that shine new light on AI’s potential.

Attendees of GTC, which has free registration, will have the opportunity to interact with the artists in panel discussions and workshops. Session highlights include: 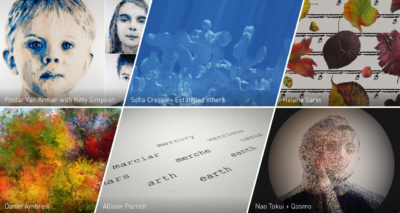 Register to join us at GTC April 12-16, and enjoy the AI Art Gallery and related sessions.

The post Art and Music in Light of AI appeared first on The Official NVIDIA Blog.