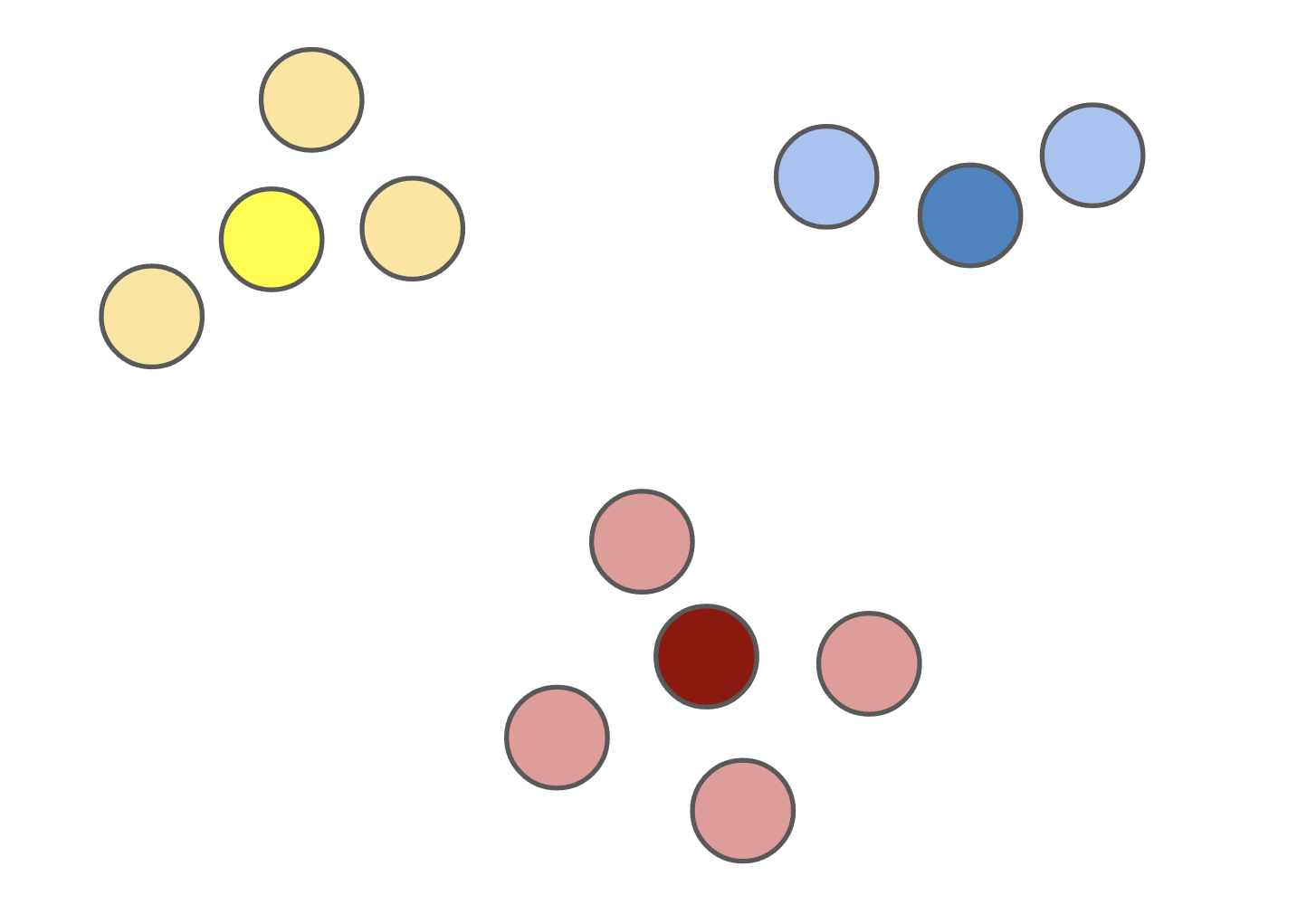 Like the (k)-means problem, the (k)-medoids problem is a clustering problem in which our objective is to partition a dataset into disjoint subsets. In (k)-medoids, however, we require that the cluster centers must be actual datapoints, which permits greater interpretability of the cluster centers. (k)-medoids also works better with arbitrary distance metrics, so your clustering can be more robust to outliers if you’re using metrics like (L_1).

Despite these advantages, most people don’t use (k)-medoids because prior algorithms were too slow. In our NeurIPS paper, BanditPAM, we sped up the best known algorithm from (O(n^2)) to (O(ntext{log}n)).

We’ve released our implementation, which is pip-installable. It’s written in C++ for speed and supports parallelization and intelligent caching, at no extra complexity to end users. Its interface also matches the (texttt{sklearn.cluster.KMeans}) interface, so minimal changes are necessary to existing code.

Figure 1: The (k)-medoids solution (left) forces the cluster centers to be actual datapoints. This solution is often different from the (k)-means solution (right).

The (k)-medoids problem has several advantages over (k)-means. By forcing the cluster centers — dubbed the medoids — to be actual datapoints, solutions tend to be more interpretable since you can determine exactly which datapoint is the cluster center for each cluster. When clustering images from the ImageNet dataset, for example, the mean of a solution to the (k)-means problem with (k = 1) are usually nondescript blobs (Figure 2, left), whereas the medoids of a corresponding solution to the (k)-medoids problem are actual images (Figure 2, right).

The (k)-medoids problem also supports arbitrary distance metrics, in contrast with (k)-means which usually requires (L_2) distance for efficiency. In fact, you’re allowed to use any pairwise dissimilarity function with (k)-medoids — your dissimilarity function need not even satisfy the properties of a metric. It can be asymmetric, negative, and violate the triangle inequality. In practice, allowing for arbitrary dissimilarity metrics enables the clustering of “exotic” objects like strings, natural language, trees, graphs, and more — without needing to embed these objects in a vector space first.

In our NeurIPS paper, BanditPAM, we reduced the complexity of the best known (k)-medoids algorithm from (O(n^2)) to (O(ntext{log}n)). This complexity almost matches the complexity of standard (k)-means algorithms — and now, you get all the benefits of (k)-medoids on top. We’ve also released a high-performance implementation of our algorithm written in C++ for speed but callable from Python via python bindings; (texttt{pip install banditpam}) and you’re ready to go! Our algorithm’s interface matches that of (texttt{sklearn.cluster.KMeans}) and can be used with a simple 2-line change. You can also implement your own distance metrics, interpret cluster centers, and cluster structured data!

How does our algorithm, BanditPAM, work? Our claim is that we match the prior state-of-the-art solutions in clustering quality by recovering the exact same solution and reduce the complexity from (O(n^2)) to (O(ntext{log}n)). But is this reduction in complexity just “for free”?

To discuss how BanditPAM works, we first need to discuss its predecessor, the Partitioning Around Medoids (PAM) algorithm. The PAM algorithm, first proposed in 19901, is a greedy solution to the (k)-medoids problem. PAM is broken into two steps: the BUILD step and the SWAP step.

In the BUILD step, each of the (k) medoids is greedily initialized one by one. More concrete, PAM considers all possible datapoints as “candidate” medoids. For every candidate medoid, we compute the change in the overall loss if we were to add that candidate to the set of medoids conditioned on the previously assigned medoids being fixed. This results in an (O(n^2)) computational complexity since we need to compute every pairwise distance.

[In the SWAP step, we consider all (kn) (medoid, non-medoid) pairs and the change in loss that would be induced if we were to swap the first element of the pair out of the medoid set in favor of the second. Again, this procedure incurs an (O(n^2)) time complexity (really (O(kn^2))).

Figure 3: The (k)-medoids algorithm in action. In the BUILD step, each medoid is assigned greedily, one-by-one. In the SWAP step, we consider swapping medoid assignments to see if we can lower the overall loss.

Our fundamental insight was that for each step of the PAM algorithm, we don’t actually need to compute the distance from each point to all other (n) points. Instead, we can just sample these distances!

Consider, for example, the problem of assigning the first medoid at the beginning of the BUILD step. PAM would go through all (n) points and, for each point, compute its distance to every other point. We realized that, for each candidate, we only needed to compute the distance to (O(text{log}n)) other points. By intelligently choosing which distances to compute, we can save a lot of unnecessary computation. Formally, we reduce the problem of assigning the first medoid to a multi-armed bandit problem, as demonstrated in Figure 4. In multi-armed bandit problems, our objective is to identify the best action to take — also referred to as the best arm to pull — when actions are independent and have stochastic returns.

Now, if you’re familiar with multi-armed bandits, you might protest. Our algorithm is a randomized algorithm and can sometimes return an incorrect result. In the full paper, we show that the probability of getting a “wrong” answer is very small. In practice, this means that users of our algorithm don’t have to worry and will almost always get the same answer as the original PAM algorithm.

The BanditPAM algorithm is an (O(ntext{log}n)) algorithm that matches prior state-of-the-art algorithms in clustering quality and almost matches the complexity of popular (k)-means algorithms. Want to try out BanditPAM? Run (texttt{pip3 install banditpam}) and jump to our examples.

Figure 5: A formal proof that (k)-medoids is superior to (k)-means in every way.

This blog post is based on the paper: BanditPAM: Almost Linear Time (k)-medoids Clustering via Multi-Armed Bandits. NeurIPS 2021.

A special thanks to my collaborators on this project, Martin Jinye Zhang, James Mayclin, Sebastian Thrun, Chris Piech, and Ilan Shomorony, as well as the reviewers of this blog post, Drew A. Hudson and Sidd Karamcheti.