The world we live in is constantly changing, and so is the data that is collected to build models. One of the problems that is often seen in production environments is that the deployed model doesn’t behave the same way as it did during the training phase. This concept is generally called data drift or dataset shift, and can be caused by many factors, such as bias in sampling data that affects features or label data, the non-stationary nature of time series data, or changes in the data pipeline. Because machine learning (ML) models aren’t deterministic, it’s important to minimize the variance in the production environment by periodically monitoring the deployment environment for model drift and sending alerts and, if necessary, triggering retraining of the models with new data.

Amazon SageMaker is a fully managed service that enables developers and data scientists to quickly and easily build, train, and deploy ML models at any scale. After you train an ML model, you can deploy it on SageMaker endpoints that are fully managed and can serve inferences in real time with low latency. After you deploy your model, you can use Amazon SageMaker Model Monitor to continuously monitor the quality of your ML model in real time. You can also configure alerts to notify and trigger actions if any drift in model performance is observed. Early and proactive detection of these deviations enables you to take corrective actions, such as collecting new ground truth training data, retraining models, and auditing upstream systems, without having to manually monitor models or build additional tooling.

In this post, we present some techniques to detect covariate drift (one of the types of data drift) and demonstrate how to incorporate your own drift detection algorithms and visualizations with Model Monitor.

Data drift can be classified into three categories depending on whether the distribution shift is happening on the input or on the output side, or whether the relationship between the input and the output has changed.

While covariate shift focuses on changes in the feature distribution, label shift focuses on changes in the distribution of the class variable. This type of shifting is essentially the reverse of covariate shift. An intuitive way to think about it might be to consider an unbalanced dataset; for example, if the spam to non-spam ratio of emails in our training set is 50%, but in reality, 10% of our emails are non-spam, then the target label distribution has shifted.

Now that we know the types of distribution shifts, let’s see how Model Monitor helps us in detecting data drifts. In the next section, we walk through setting up Model Monitor and incorporating our custom drift detection algorithms.

Deequ, which measures data quality, powers some of the Model Monitor pre-built monitors. You don’t require coding to utilize these pre-built monitoring capabilities. You also have the flexibility to monitor models by coding to provide custom analysis. All metrics emitted by Model Monitor can be collected and viewed in Amazon SageMaker Studio, so you can visually analyze your model performance without writing additional code.

In certain scenarios, the pre-built monitors may not be sufficient to generate sophisticated metrics to detect drifts, and may necessitate bringing your own metrics. In the next sections, we describe the setup to bring in your metrics by building a custom container.

For this post, we use a SageMaker notebook to set up Model Monitor and also visualize the drifts. We begin with setting up required roles and Amazon Simple Storage Service (Amazon S3) buckets to store our data:

Next, we upload our training and test datasets, and also the training model we use for inference. For this post, we use the Census Income Dataset from UCI Machine Learning Repository. The dataset consists of people’s income and several attributes that describe population demographics. The task is to predict if a person makes above or below $50,000. This dataset contains both categorical and integral attributes, and has several missing values. This makes it a good example to demonstrate model drift and detection.

The following code uploads our datasets and model to Amazon S3:

Set up a Docker container

Model Monitor supports bringing your own custom model monitor containers. When you create a MonitoringSchedule, Model Monitor starts processing jobs for evaluating incoming inference data. While invoking the containers, Model Monitor sets up additional environment variables for you so that your container has enough context to process the data for that particular run of the scheduled monitoring. For the container code variables, see Container Contract Inputs. Of the available input environmental variables, we’re interested in dataset_source, output_path, and end_time:

The dataset_source variable specifies the data capture location on the container, and end_time refers to the time of the last event capture. The custom drift algorithm is included in the src directory. For details on the algorithms, see the GitHub repo.

Now we build the Docker container and push it to Amazon ECR. See the following Dockerfile:

We build and push it to Amazon ECR with the following code:

Set up an endpoint and enable data capture

As we mentioned before, our model was trained using XGBoost, so we use XGBoostModel from the SageMaker SDK to deploy the model. Because we have a custom input parser, which includes imputation and one-hot encoding, we provide the inference entry point along with source directory, which includes the Scikit ColumnTransfomer model. The following code is the customer inference function:

After we deploy the model, we can set up a monitor schedule.

For the algorithms we use in this post (such as Wasserstein distance and Kolmogorov–Smirnov test), the container that we build needs access to both the training dataset and the inference data for computing metrics. This non-typical setup requires some low-level setup of the monitor schedule. The following code is the Boto3 request to set up the monitor schedule. The key fields are related to the container image URL and arguments to the container. We cover building containers in the next section. For now, note that we pass the S3 URL for training the dataset:

Generate requests for the endpoint

After we deploy the model, we send traffic at a constant rate to the endpoints. The following code launches a thread to generate the requests for about 10 hours. Make sure to stop the kernel if you want to stop the traffic. We let the traffic generator run for a few hours to collect enough samples to visualize drift. The plots automatically refresh whenever there is new data.

We use the entire dataset for training and synthetically generate a new dataset for inference by modifying statistical properties of some of the attributes from the original dataset as described in our GitHub repo.

The following plot shows the drift scores over the time intervals. A few features have low to no drifts, while some features have drifts that are increasing over time, and finally hours-per-week has a large drift right from the start. 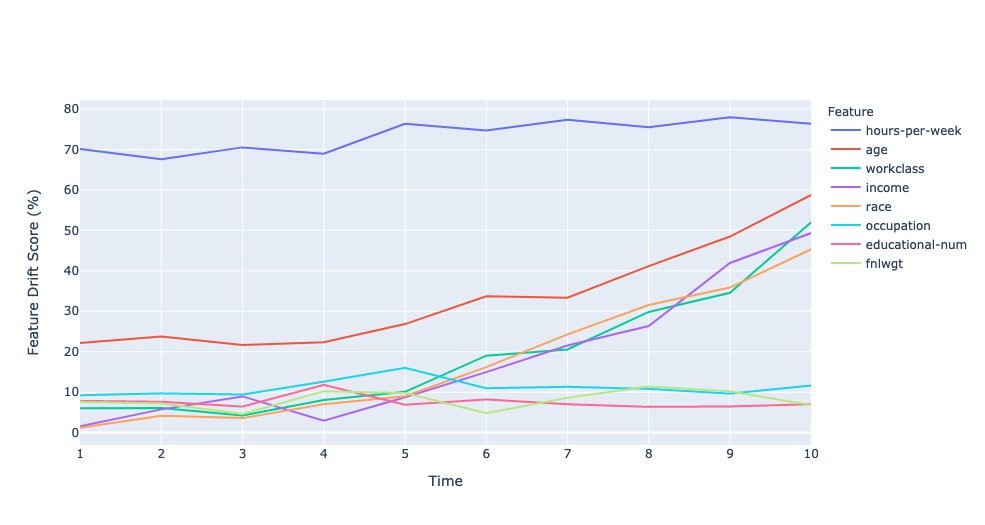 The following plot shows the corresponding degradation in model accuracy due to drift in the incoming data. This demonstrates that covariate shift can reduce accuracy of a model. A few spikes in the metric can be attributed to the statistical nature of how the data is generated. This is only a proxy for model accuracy, and not the actual accuracy, which can only be known from the ground truth of the labels. 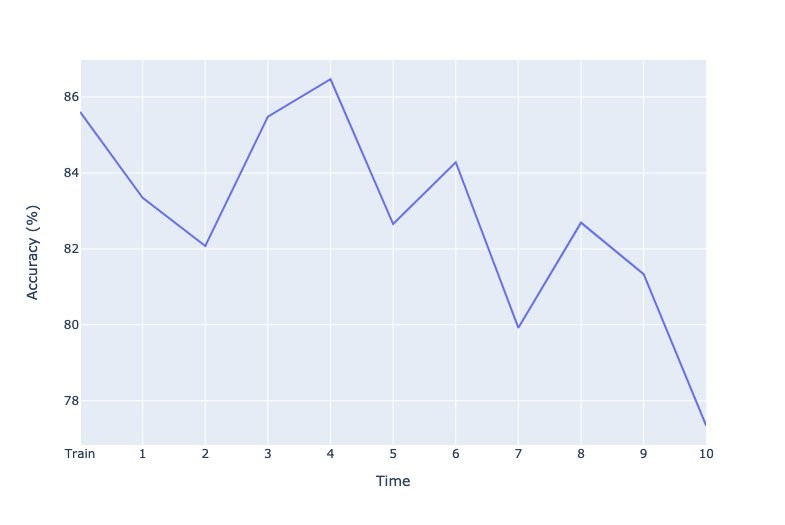 A null test hypothesis tests whether two samples (for this post, the training and inference datasets) are derived from the same general population. The p-value gives the probability of obtaining test results at least as extreme as the observations under the assumption that the null hypothesis is correct. A p-value threshold of 5% is used to decide whether the observed sample has drifted from the training data or not.

The following plot shows p-values of different attributes that have crossed the threshold at least once. The y-axis shows the inverse log of p-values to distinguish very small p-values. P-values for numerical attributes are obtained from Kolmogorov–Smirnov test, and for categorical attributes from Chi-square test. 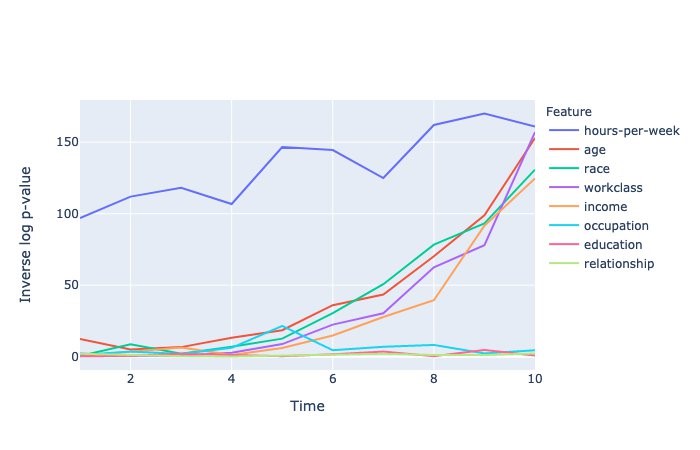 Amazon SageMaker Model Monitor is a powerful tool to detect data drift. In this post, we showed how to easily integrate your custom data drift detection algorithms into Model Monitor, while benefiting from the heavy lifting that Model Monitor provides in terms of data capture and scheduling the monitor runs. The notebook provides a detailed step-by-step instruction on how to build a custom container and attach it to Model Monitor schedules. Give Model Monitor a try and leave your feedback in the comments.

Vinay Hanumaiah is a Senior Deep Learning Architect at Amazon ML Solutions Lab, where he helps customers build AI and ML solutions to accelerate their business challenges. Prior to this, he contributed to the launch of AWS DeepLens and Amazon Personalize. In his spare time, he enjoys time with his family and is an avid rock climber.