The Guinness Six Nations Championship began in 1883 as the Home Nations Championship among England, Ireland, Scotland, and Wales, with the inclusion of France in 1910 and Italy in 2000. It is among the oldest surviving rugby traditions and one of the best-attended sporting events in the world. The COVID-19 outbreak disrupted the end of the 2020 Championship and four games were postponed. The remaining rounds resumed on October 24. With the increasing application of artificial intelligence and machine learning (ML) in sports analytics, AWS and Stats Perform partnered to bring ML-powered, real-time stats to the game of rugby, to enhance fan engagement and provide valuable insights into the game.

This post summarizes the collaborative effort between the Guinness Six Nations Rugby Championship, Stats Perform, and AWS to develop an ML-driven approach with Amazon SageMaker and other AWS services that predicts the probability of a successful penalty kick, computed in real time and broadcast live during the game. AWS infrastructure enables single-digit millisecond latency for kick predictions during inference. The Kick Predictor stat is one of the many new AWS-powered, on-screen dynamic Matchstats that provide fans with a greater understanding of key in-game events, including scrum analysis, play patterns, rucks and tackles, and power game analysis. For more information about other stats developed for rugby using AWS services, see the Six Nations Rugby website.

Rugby is a form of football with a 23-player match day squad. 15 players on each team are on the field, with additional substitutions waiting to get involved in the full-contact sport. The objective of the game is to outscore the opposing team, and one way of scoring is to kick a goal. The ability to kick accurately is one of the most critical elements of rugby, and there are two ways to score with a kick: through a conversion (worth two points) and a penalty (worth three points).

Predicting the likelihood of a successful kick is important because it enhances fan engagement during the game by showing the success probability before the player kicks the ball. There are usually 40–60 seconds of stoppage time while the player sets up for the kick, during which the Kick Predictor stat can appear on-screen to fans. Commentators also have time to predict the outcome, quantify the difficulty of each kick, and compare kickers in similar situations. Moreover, teams may start to use kicking probability models in the future to determine which player should kick given the position of the penalty on the pitch.

To calculate the penalty success probability, the Amazon Machine Learning Solutions Lab used Amazon SageMaker to train, test, and deploy an ML model from historical in-game events data, which calculates the kick predictions from anywhere in the field. The following sections explain the dataset and preprocessing steps, the model training, and model deployment procedures.

Stats Perform provided the dataset for training the goal kick model. It contained millions of events from historical rugby matches from 46 leagues from 2007–2019. The raw JSON events data that was collected during live rugby matches was ingested and stored on Amazon Simple Storage Service (Amazon S3). It was then parsed and preprocessed in an Amazon SageMaker notebook instance. After selecting the kick-related events, the training data comprised approximately 67,000 kicks, with approximately 50,000 (75%) successful kicks and 17,000 misses (25%).

The following graph shows a summary of kicks taken during a sample game. The athletes kicked from different angles and various distances. 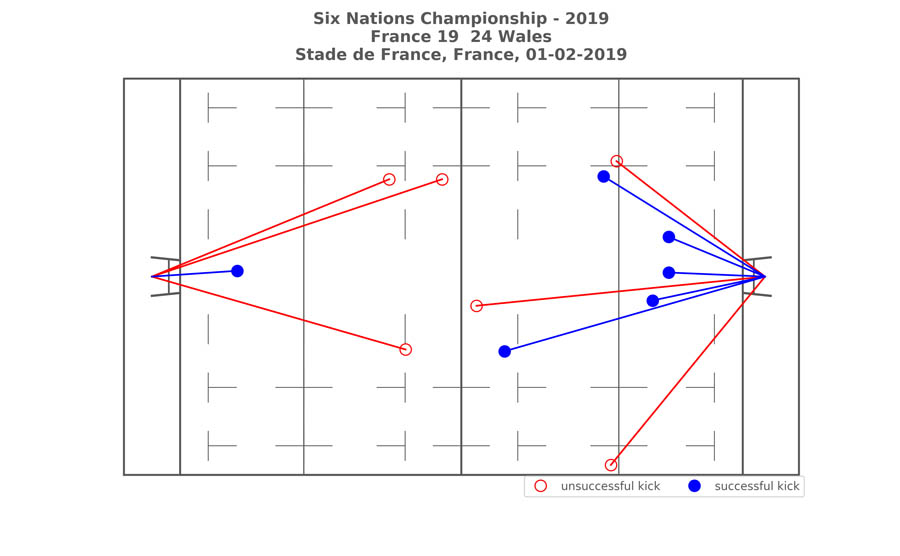 Rugby experts contributed valuable insights to the data preprocessing, which included detecting and removing anomalies, such as unreasonable kicks. The clean CSV data went back to an S3 bucket for ML training.

The following graph depicts the heatmap of the kicks after preprocessing. The left-side kicks are mirrored. The brighter colors indicated a higher chance of scoring, standardized between 0 to 1. 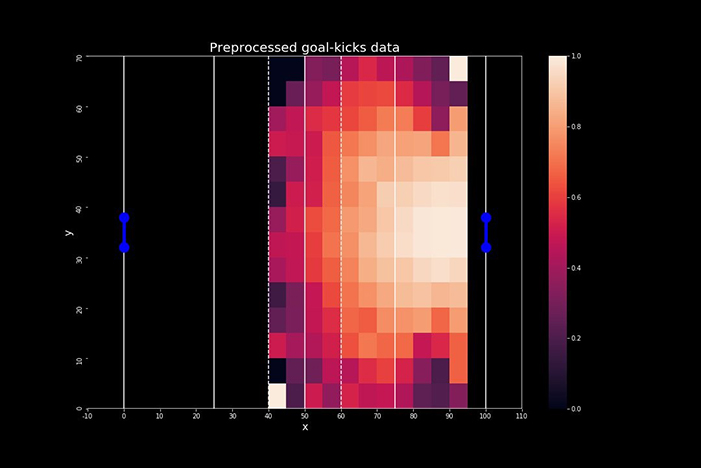 The location-based and player performance features are the most important features in the model.

After feature engineering, the categorical variables were one-hot encoded, and to avoid the bias of the model towards large-value variables, the numerical predictors were standardized. During the model training phase, a player’s historical performance features were pushed to Amazon DynamoDB tables. DynamoDB helped provide single-digit millisecond latency for kick predictions during inference.

To explore a wide range of classification algorithms (such as logistic regression, random forests, XGBoost, and neural networks), a 10-fold stratified cross-validation approach was used for model training. After exploring different algorithms, the built-in XGBoost in Amazon SageMaker was used due to its better prediction performance and inference speed. Additionally, its implementation has a smaller memory footprint, better logging, and improved hyperparameter optimization (HPO) compared to the original code base.

To create the XGBoost estimator for this use case, enter the following code:

After you create the XGBoost estimator object, set its initial hyperparameter values as shown in the following code:

For this post, AUC (area under the ROC curve) is the evaluation metric. This enables the tuning job to measure the performance of the different training jobs. The kick prediction is also a binary classification problem, which is specified in the objective argument as a binary:logistic. There is also a set of XGBoost-specific hyperparameters that you can tune. For more information, see Tune an XGBoost model.

Next, create a HyperparameterTuner object by indicating the XGBoost estimator, the hyperparameter ranges, passing the parameters, the objective metric name and definition, and tuning resource configurations, such as the number of training jobs to run in total and how many training jobs can run in parallel. Amazon SageMaker extracts the metric from Amazon CloudWatch Logs with a regular expression. See the following code:

Finally, launch a hyperparameter tuning job by calling the fit() function. This function takes the paths of the training and validation datasets in the S3 bucket. After you create the hyperparameter tuning job, you can track its progress via the Amazon SageMaker console. The training time depends on the instance type and number of instances you selected during tuning setup.

Deploying the model on Amazon SageMaker

When the training jobs are complete, you can deploy the best performing model. If you’d like to compare models for A/B testing, Amazon SageMaker supports hosting representational state transfer (REST) endpoints for multiple models. To set this up, create an endpoint configuration that describes the distribution of traffic across the models. In addition, the endpoint configuration describes the instance type required for model deployment. The first step is to get the name of the best performing training job and create the model name.

After you create the endpoint, you can request a prediction in real time.

You can create a secure and scalable RESTful API that enables you to request the model prediction based on the input values. It’s easy and convenient to develop different APIs using AWS services.

First, you request the probability of the kick conversion by passing parameters through Amazon API Gateway, such as the location and zone of the kick, kicker ID, league and Championship ID, the game’s period, if the kicker’s team is playing home or away, and the team score status.

The API Gateway passes the values to the AWS Lambda function, which parses the values and requests additional features related to the player’s performance from DynamoDB lookup tables. These include the mean success rates of the kicking player in a given field zone, in the Championship, and in the kicker’s entire career. If the player doesn’t exist in the database, the model uses the average performance in the database in the given kicking location. After the function combines all the values, it standardizes the data and sends it to the Amazon SageMaker model endpoint for prediction.

The model performs the prediction and returns the predicted probability to the Lambda function. The function parses the returned value and sends it back to API Gateway. API Gateway responds with the output prediction. The end-to-end process latency is less than a second.

The following screenshot shows example input and output of the API. The RESTful API also outputs the average success rate of all the players in the given location and zone to get the comparison of the player’s performance with the overall average.

To create the first real-time prediction model for the tournament with a millisecond latency requirement, the ML Solutions Lab team worked backwards to identify areas in which design thinking could save time and resources. The team worked on an end-to-end notebook within an Amazon SageMaker environment, which enabled data access, raw data parsing, data preprocessing and visualization, feature engineering, model training and evaluation, and model deployment in one place. This helped in automating the modeling process.

Moreover, the ML Solutions Lab team implemented a model update iteration for when the model was updated with newly generated data, in which the model parses and processes only the additional data. This brings computational and time efficiencies to the modeling.

In terms of next steps, the Stats Perform AI team has been looking at the next stage of rugby analysis by breaking down the other strategic facets as line-outs, scrums and teams, and continuous phases of play using the fine-grain spatio-temporal data captured. The state-of-the-art feature representations and latent factor modelling (which have been utilized so effectively in Stats Perform’s “Edge” match-analysis and recruitment products in soccer) means that there is plenty of fertile space for innovation that can be explored in rugby.

Six Nations Rugby, Stats Perform, and AWS came together to bring the first real-time prediction model to the 2020 Guinness Six Nations Rugby Championship. The model determined a penalty or conversion kick success probability from anywhere in the field. They used Amazon SageMaker to build, train, and deploy the ML model with variables grouped into three main categories: location-based features, player performance features, and in-game situational features. The Amazon SageMaker endpoint provided prediction results with subsecond latency. The model was used by broadcasters during the live games in the Six Nations 2020 Championship, bringing a new metric to millions of rugby fans.

Mehdi Noori is a Data Scientist at the Amazon ML Solutions Lab, where he works with customers across various verticals, and helps them to accelerate their cloud migration journey, and to solve their ML problems using state-of-the-art solutions and technologies.

Tesfagabir Meharizghi is a Data Scientist at the Amazon ML Solutions Lab where he works with customers across different verticals accelerate their use of artificial intelligence and AWS cloud services to solve their business challenges. Outside of work, he enjoys spending time with his family and reading books.

Patrick Lucey is the Chief Scientist at Stats Perform. Patrick started the Artificial Intelligence group at Stats Perform in 2015, with thegroup focusing on both computer vision and predictive modelling capabilities in sport. Previously, he was at Disney Research for 5 years, where he conducted research into automatic sports broadcasting using large amounts of spatiotemporal tracking data. He received his BEng(EE) from USQ and PhD from QUT, Australia in 2003 and 2008 respectively. He was also co-author of the best paper at the 2016 MIT Sloan Sports Analytics Conference and in 2017 & 2018 was co-author of best-paper runner-up at the same conference.