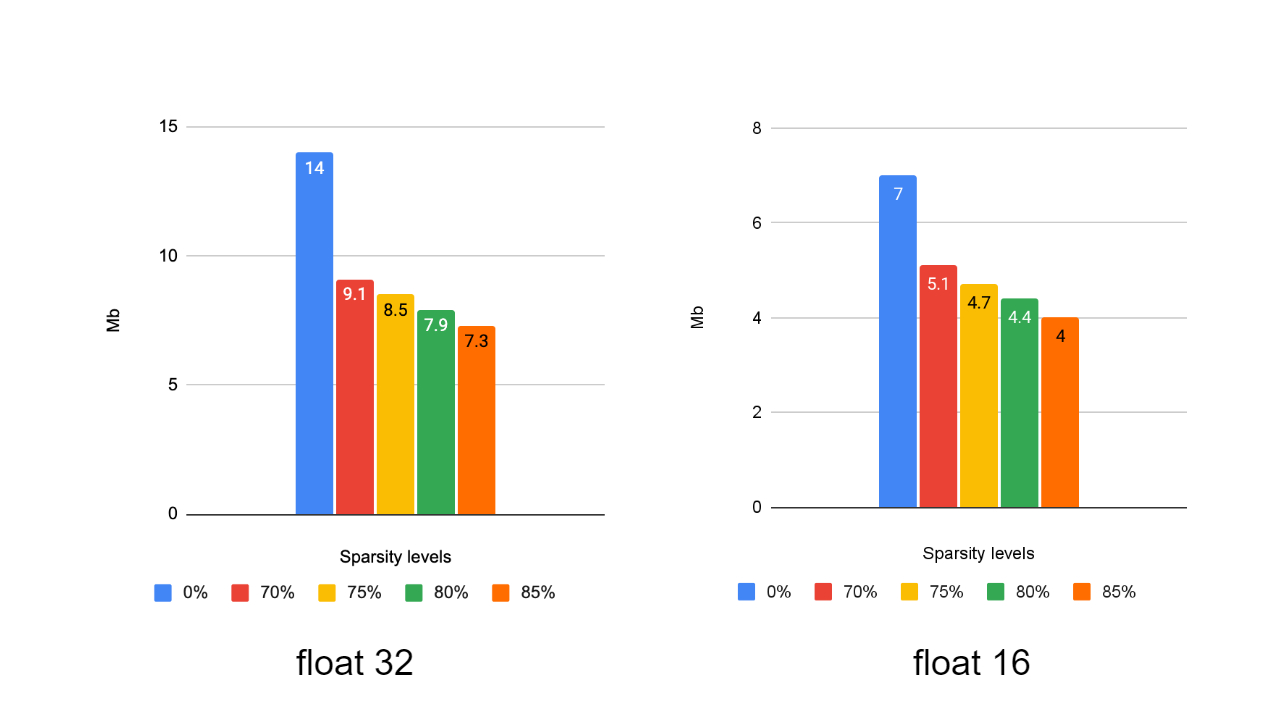 Pruning is one of the core optimization techniques provided in the TensorFlow Model Optimization Toolkit (TF MOT). Not only does it help to significantly reduce model size, but it can also be used to accelerate CPU inference on mobile and web. With modern compute intensive models, the area of pruning as a model optimization technique has drawn significant attention, demonstrating that dense networks can be easily pruned (i.e. a fraction of the weights set to zero) with negligible quality degradation. Today, we are excited to announce a set of updates to TF MOT Pruning API that simplify pruning and enable developers to build sparse models for fast on-device inference.

TensorFlow has long standing support for neural network pruning via TensorFlow Model Optimization Toolkit (TF MOT) Pruning API. The API, featured in 2019, introduced essential primitives for pruning, and enabled researchers throughout the world with new optimization techniques. Today we are happy to announce experimental updates to the API that further advance model pruning. We are releasing tools that simplify the control of pruning and enable latency reduction for on-device inference.

The TF MOT Pruning API has extensive functionality that provides the user with tools for model manipulation:

These abstractions allow to control almost any aspect of model pruning (i.e. how to prune (PruneLowMagnitude), when to prune (PruningSchedule) and how to track the progress of the pruning (PruningSummaries) with the exception of what to prune, i.e. where PruneLowMagnitude wrapper is applied. We are happy to release an extension of TF MOT PruningPolicy, a class that controls which parts of the model the PruneLowMagnitude wrapper is applied to. The instance of PruningPolicy is used as an argument in the prune_low_magnitude function and provides the following functionalities:

The below example showcases the PruneForLatencyOnXNNPack policy in action on

MobileNetV2 (the full example is available in a recently introduced colab):

In order to comply with the constraints of XNNPACK sparse inference the Keras implementation of MobileNetV2 model requires slight modification of the padding for the first convolution operation:

The PruneForLatencyOnXNNPack policy applies the pruning wrapper only to convolutions with 1×1 kernel size since only these layers can be accelerated on CPU by as much as 2x using XNNPACK. The rest of the layers are left untouched allowing the network to recover after quality degradation at the pruning step. Also, the policy verifies that the model is amenable to being pruned by using the ensure_model_supports_pruning method. Once the sparse model has been trained and converted, we recommend using the TensorFlow Lite benchmark utility in debug mode to confirm that the final model is compatible with XNNPack’s sparse inference backend.

We hope that this newly introduced experimental API will be useful in practice and we will continue to improve its stability and flexibility in the future.

Model compression is another major benefit of applying pruning to a model. Using a smart compression format allows efficient storage of model weights which leads to a significant size reduction.

We also adapted the format to use flexible data types for the metadata storing the indices of non-zero elements. This reduces the storage overhead for small tensors, or tensors with compact data types like int8_t.

In order to realize size reductions in practice during the model conversion, the tf.lite.Optimize.EXPERIMENTAL_SPARSITY optimization needs to be applied. This optimization handles examining the model for sparse tensors and converting them to an efficient storage format. It also works seamlessly with quantization and you can combine them to achieve more aggressive model compresion. The full example of such a conversion is shown below:

After applying the tf.lite.Optimize.EXPERIMENTAL_SPARSITY optimization together with PruneForLatencyOnXNNPack pruning policy, a ~2x size reduction can be achieved as is demonstrated in Figure 1:

In addition to size reduction, pruning can provide inference acceleration on CPU via XNNPACK. Using the PruneForLatencyOnXNNPack pruning policy, we’ve conducted an ablation study of CPU inference latency for a MobileNetV2 model on Pixel 4 using TensorFlow Lite benchmark with the use_xnnpack option enabled:

This study in Figure 2 demonstrates 1.7x latency improvement when running on mobile devices using XNNPACK. The strategies for training the sparse MobileNetV2 model together with hyperparameters and pre-trained checkpoints are described in Elsen et al.

Pruning aware training is a key step in model optimization. Many hyperparameters are involved in training and some of them like the pruning schedule and learning rate can have a dramatic impact on the final quality of the model. Though many strategies have been proposed, a simple yet effective 3-steps strategy (see Table 1) achieves strong performance for the majority of our use cases. The strategy builds on top of the well-proven approach from Zhu & Gupta and produces good results without extensive re-training:

The strategy inevitably leads to a substantial increase (~3x) in the training time. However, paired with the PolynomialDecay pruning schedule, this 3-step strategy achieves limited or no quality degradation with significantly pruned (>70%) neural networks.

Together with the updates to the TF MOT Pruning API, we are happy to release pruned models for some of the MediaPipe solutions. The released models include pose and face detectors as well as a pruned hand tracking model. All of these models have been trained with the newly introduced functionality using the 3-steps pruning strategy. Compared with dense baselines the released pruned models have demonstrated significant model size reduction as well as superior performance when running on CPU via XNNPACK. Quality-wise the pruned models achieve similar metrics including in the evaluation on our fairness datasets (see model cards for details). Side-by-side demos of the solutions are shown below:

While exploiting sparsity on GPUs can be challenging, recent work has made progress in improving the performance of sparse operations on these platforms. There is momentum for adding first-class support for sparse matrices and sparse operations in popular frameworks, and state-of-the-art GPUs have recently added hardware acceleration for some forms of structured sparsity. Going forward, improvements in software and hardware support for sparsity in both training and inference will be a key contributor to progress in the field.

TF MOT offers a variety of model optimization methods, many of which have proven to be essential for efficient on-device model inference. We will continue to expand the TF MOT Pruning API with algorithms beyond low magnitude pruning, and also investigate the combination of pruning and quantization techniques to achieve even better results for on-device inference. Stay tuned!