A common practice to improve a neural network’s performance and tailor it to available computational resources is to adjust the architecture depth and width. Indeed, popular families of neural networks, including EfficientNet, ResNet and Transformers, consist of a set of architectures of flexible depths and widths. However, beyond the effect on accuracy, there is limited understanding of how these fundamental choices of architecture design affect the model, such as the impact on its internal representations.

We apply CKA to a family of ResNets of varying depths and widths, trained on common benchmark datasets (CIFAR-10, CIFAR-100 and ImageNet), and use representation heatmaps to illustrate the results. The x and y axes of each heatmap index the layers of the model(s) in consideration, going from input to output, and each entry (i, j) is the CKA similarity score between layer i and layer j.

Below is an example of the resulting heatmap when we compare representations of each layer to every other layer within a single ResNet of depth 26 and width multiplier 1. In the design convention used here, the stated depth only refers to the number of convolutional layers in the network, but we analyze all layers present, and the width multiplier applies to the number of filters in each convolution. Notice the checkerboard pattern in the heatmap, which is caused by skip connections (shortcuts between layers) in the architecture. 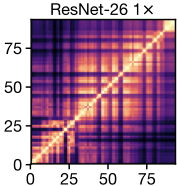 The Emergence of the Block Structure
What stands out from the representation heatmaps of deeper or wider networks is the emergence of a large set of consecutive layers with highly similar representations, which appears in the heatmaps as a yellow square (i.e., a region with high CKA scores). This phenomenon, which we call the block structure, suggests that the underlying layers may not be as efficient at progressively refining the network’s representations as we expect. Indeed, we show that the task performance becomes stagnant inside the block structure, and that it is possible to prune some underlying layers without affecting the final performance.

Through further analysis, we are also able to demonstrate that the block structure arises from preserving and propagating the dominant principal components of its underlying representations. Refer to our paper for more details.

Error Analysis of Wide and Deep Models
Having explored the properties of the learned representations of wide and deep models, we next turn to understanding how they influence the diversity of the output predictions. We train populations of networks of different architectures and determine on which test set examples each architecture configuration tends to make errors.

On both CIFAR-10 and ImageNet datasets, wide and deep models that have the same average accuracy still demonstrate statistically significant differences in example-level predictions. The same observation holds for class-level errors on ImageNet, with wide models exhibiting a small advantage in identifying classes corresponding to scenes, and deep networks being relatively more accurate on consumer goods.

Conclusions
In studying the effects of depth and width on internal representations, we uncover a block structure phenomenon, and demonstrate its connection to model capacity. We also show that wide and deep models exhibit systematic output differences at class and example levels. Check out the paper for full details on these results and additional insights! We’re excited about the many interesting open questions these findings suggest, such as how the block structure arises during training, whether the phenomenon occurs in domains beyond image classification, and ways these insights on internal representations can inform model efficiency and generalization.

Acknowledgements
This is a joint work with Maithra Raghu and Simon Kornblith. We would like to thank Tom Small for the visualizations of the representation heatmap.