AWS DeepRacer allows you to get hands on with machine learning (ML) through a fully autonomous 1/18th scale race car driven by reinforcement learning, a 3D racing simulator on the AWS DeepRacer console, a global racing league, and hundreds of customer-initiated community races.

We’re excited to announce that racing action is right around the next turn as the 2021 AWS DeepRacer League season starts March 1. But as of today, you can start training your models to get racing fit! February 1 is the kickoff of the official pre-season, where racers with the fastest qualifying Time Trial race results earn a spot to commence the official season (March 1) in the new AWS DeepRacer League Pro division.

After midnight GMT on February 28, the league will calculate the top 10% of times recorded from February 1 through February 28. The developers that make those times will be our first group of Pro division racers and start the official 2021 season in that division.

The 2021 season will introduce new skill-based Open and Pro racing divisions, where developers have five times more opportunities to win rewards and prizes than in the 2020 season! The Open division is available to all developers who want to train their reinforcement learning (RL) model and compete in the Time Trial format. The Pro division is for those racers who have earned a top 10% Time Trial result from the previous month. Racers in the Pro division can earn bigger rewards and win qualifying seats for the 2021 AWS re:Invent Championship Cup. 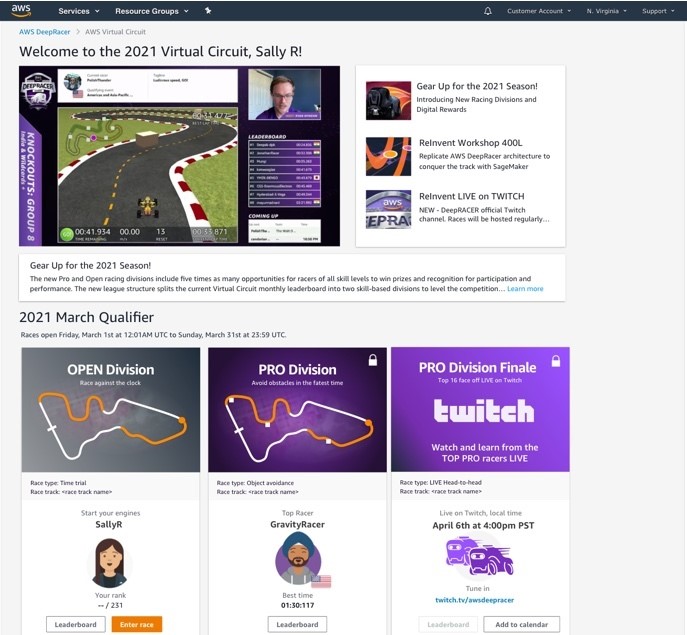 The new league structure splits the current Virtual Circuit monthly leaderboard into two skill-based divisions, each with their own prizes to maintain a high level of competitiveness in the League. The Open division is where all racers begin their ML learning journey, and rewards participation each month with new digital rewards.

The digital rewards feature, coming soon, enables you to earn and accumulate rewards that recognize achievements along your ML journey. Rewards include vehicle customizations, badges, and avatar accessories that recognize achievements like races completed and fastest times earned. The top racers in the Open division can earn their way into the Pro division each month by finishing in the top 10% of Time Trial results. Similar to previous seasons, winners of the Pro division’s monthly race automatically qualify for the Championship Cup with a trip to AWS re:Invent for a chance to lift the 2021 Cup and receive $10,000 in AWS credits and an F1 experience or a $20,000 value ML education sponsorship.

Racing your model to faster and faster time results in Open and Pro division races can earn you digital rewards like this new racing skin for your virtual racing fun!

“The DeepRacer League has been a fantastic way for thousands of people to test out their newly learnt machine learning skills,” says AWS Hero and AWS Machine Learning Community Founder Lyndon Leggate. “Everyone’s competitive spirit quickly shows through, and the DeepRacer community has seen tremendous engagement from members keen to learn from each other, refine their skills, and move up the ranks. The new 2021 League format looks incredible, and the Open and Pro divisions bring an interesting new dimension to racing! It’s even more fantastic that everyone will get more chances for their efforts to be rewarded, regardless of how long they’ve been racing. This will make it much more engaging for everyone, and I can’t wait to take part!”

Follow your progress during each month’s race and compare how you stack up against the competition in either the Open or Pro division. 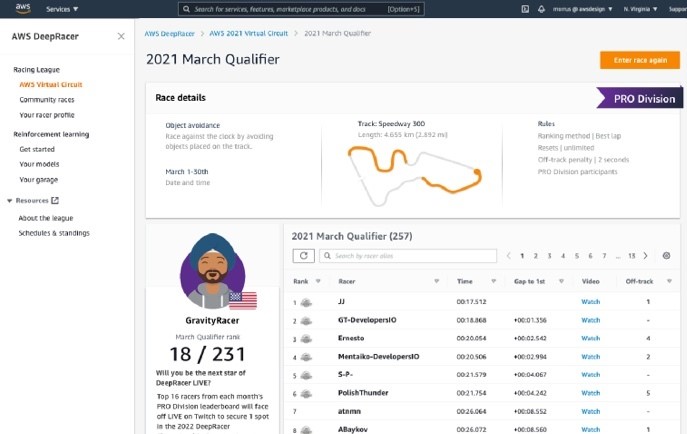 Start training your model today and get ready to race!

We’re excited for the 2021 AWS DeepRacer League season to get underway on March 1. Take advantage of pre-season racing to get your model into racing shape. With more opportunities to earn rewards and win prizes through the new skill-based Open and Pro racing divisions, there has never been a better time to get rolling with the AWS DeepRacer League. Start racing today!

Dan McCorriston is a Senior Product Marketing Manager for AWS Machine Learning. He is passionate about technology, collaborating with developers, and creating new methods of expanding technology education. Out of the office he likes to hike, cook and spend time with his family.