The Mercedes-Benz S-Class has always combined the best in engineering with a legendary heritage of craftsmanship. Now, the flagship sedan is adding intelligence to the mix, fusing AI with the embodiment of automotive luxury.

At a world premiere event, the legendary premium automaker debuted the redesigned flagship S-Class sedan. It features the all-new MBUX AI cockpit system, with an augmented reality head-up display, AI voice assistant and rich interactive graphics to enable every passenger in the vehicle, not just the driver, to enjoy personalized, intelligent features.

“This S-Class is going to be the most intelligent Mercedes ever,” said Mercedes-Benz CEO Ola Källenius during the virtual launch.

Like its predecessor, the next-gen MBUX system runs on the high-performance, energy-efficient compute of NVIDIA GPUs for instantaneous AI processing and sharp graphics. 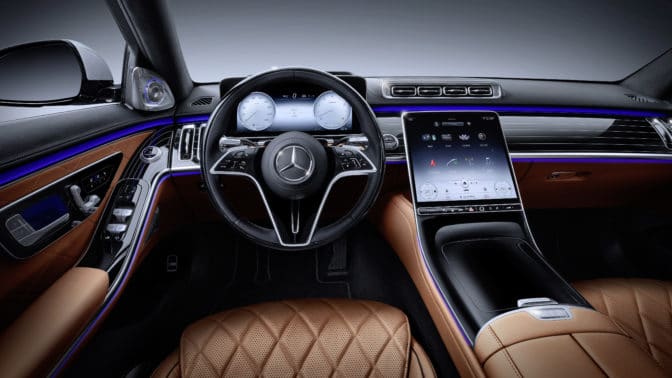 “Mercedes-Benz is a perfect match for NVIDIA, because our mission is to use AI to solve problems no ordinary computers can,” said NVIDIA founder and CEO Jensen Huang, who took the new S-Class for a spin during the launch. “The technology in this car is remarkable.”

Jensen was featured alongside Grammy award-winning artist Alicia Keys and Formula One driver Lewis Hamilton at the premiere event, each showcasing the latest innovations of the premium sedan.

The S-Class’s new intelligent system represents a significant step toward a software-defined, autonomous future. When more automated and self-driving features are integrated into the car, the driver and passengers alike can enjoy the same entertainment and productivity features, experiencing a personalized ride, no matter where they’re seated.

“For decades, the magic moment in car manufacturing was when the chassis received its engine,” Källenius said. “Today, there’s another magic moment that is incredibly important — the ‘marriage’ of the car’s body and its brain — the all-new head unit with the next-level MBUX-system.”

A vehicle’s cockpit typically requires a collection of electronic control units and switches to perform basic functions, such as powering entertainment or adjusting temperature. Leveraging NVIDIA technology, Mercedes-Benz was able to consolidate these components into an AI platform — removing 27 switches and buttons — to simplify the architecture while creating more space to add new features.

And the S-Class’s new compute headroom is as massive as its legroom. With NVIDIA at the helm, the premium sedan contains about the same computing power as 60 average vehicles. Just one chip each controls the 3D cluster, infotainment and rear seat displays.

“There’s more computing power packed into this car than any car, ever — three powerful computer chips with NVIDIA GPUs,” Jensen said. “Those three computer chips represent the brain and the nervous system of this car.”

The S-Class features five large screens, each with brilliant displays — the 12.8-inch central infotainment with OLED technology — making vehicle and comfort controls even more user-friendly for every passenger. The new 3D driver display gives a spatial view at the touch of a button, providing a realistic view of the car in its surroundings.

The system delivers even more security, enabling fingerprint, face and voice recognition, alongside a traditional PIN to access personal features. Its cameras can detect if a passenger is about to exit into oncoming traffic and warn them before they open the door. The same technology is used to monitor whether a child seat is correctly attached and if the driver is paying attention to the road.

MBUX can even carry on more conversation. It can answer a wider range of questions, some without the key phrase “Hey Mercedes,” and can interact in 27 languages, including Thai and Czech.

These futuristic functions are the result of over 30 million lines of code written by hundreds of engineers, who are continuously developing new and innovative ways for customers to enjoy their drive.

“These engineers are practically in your garage and they’re constantly working on the software, improving it, enhancing it, creating more features, and will update it over the air,” Jensen said. “Your car can now get better and better over time.”

The post In a Class of Its Own: New Mercedes-Benz S-Class Sports Next-Gen AI Cockpit, Powered by NVIDIA appeared first on The Official NVIDIA Blog.