InSpace is a communication and virtual learning platform that gives people the ability to interact, collaborate, and educate in familiar physical ways, but in a virtual space. InSpace is built by educators for educators, putting education at the center of the platform.

Being a collaboration platform, a fundamental InSpace feature is chat. From day one, we wanted to provide a mechanism to help warn users from sending and receiving toxic messages. For example, a teacher in a classroom setting with young people may want a way to prevent students from typing inappropriate comments. Or, a moderator of a large discussion may want a way to reduce inappropriate spam. Or individual users may want to filter them out on their own.

A simple way to identify toxic comments would be to check for the presence of a list of words, including profanity. Moving a step beyond this, we did not want to identify toxic messages just by words contained in the message, we also wanted to consider the context. So, we decided to use machine learning to accomplish that goal.

After some research, we found a pre-trained model for toxicity detection in TensorFlow.js that could be easily integrated into our platform. Importantly, this model runs entirely in the browser, which means that we can warn users against sending toxic comments without their messages ever being stored or processed by a server.

Performance wise, we found that running the toxicity process in a browser’s main thread would be detrimental to the user experience. We decided a good approach was to use the Web Workers API to separate message toxicity detection from the main application so the processes are independent and non-blocking. 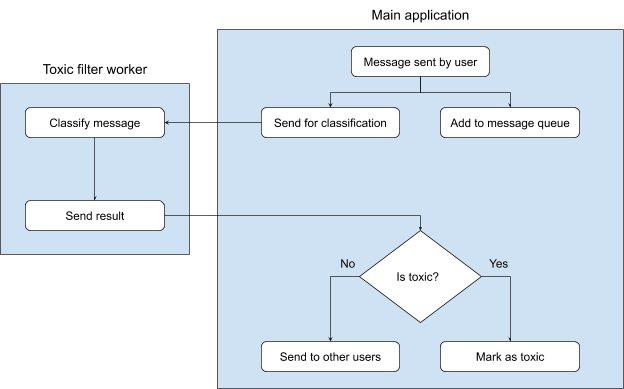 When the user sends the message, we pass it to the web worker:

After the worker is initialized, it starts listening to the data messages from the main app, and handling them using the declared onmessage callback, which then sends a message back to the main app.

As you can see, the toxicity detector is straightforward to integrate the package with an app, and does not require significant changes to existing architecture. The main application only needs a small “connector,” and the logic of the filter is written in a separate file.