We are excited to open source an end-to-end solution for TFLite on-device recommendation tasks. We invite developers to build on-device models using our solution that provides personalized, low-latency and high-quality recommendations, while preserving users’ privacy.

While purely server-based recommender systems have been proven to be powerful, we explore and showcase a more lightweight approach to serve an recommendation model by deploying it on device. We demonstrate that such an on-device recommendation solution enjoys low latency inference that is orders of magnitude faster than server-side models. It enables user experiences that cannot be achieved by traditional server-based recommender systems, such as updating rankings and UI responding to every user tap or interaction.

Moreover, on-device model inference respects user privacy without sending user data to a server to do predictions, instead keeping all needed data on the device. It is possible to train the model on public data or via an existing proxy dataset to avoid collecting user data for each new use case, which is demonstrated in our solution. For on-device training, we would refer interested readers to Federated Learning or TFLite model personalization as an alternative.

Recommendation problems are typically formulated as future-activity prediction problems. A recommendation model is therefore trained to predict the user’s future activities, given their previous activities happened before. Our published model is constructed with the following architecture:

At the label side, the label item, such as the next movie that the user watched or is interested in, is considered as “positive”, while all other items (e.g. all other movies the user didn’t watch) are considered as “negative” through negative sampling. Both positive and negative items are embedded, and the dot product combines the context embedding to produce logits and feed to the loss of softmax cross entropy. Other modeling situations where labels are not binary will be supported in future. After training, the model can be exported and deployed on device for serving. We take the top-K recommendations which are simply the K-highest logits between the context embedding and all label embeddings. 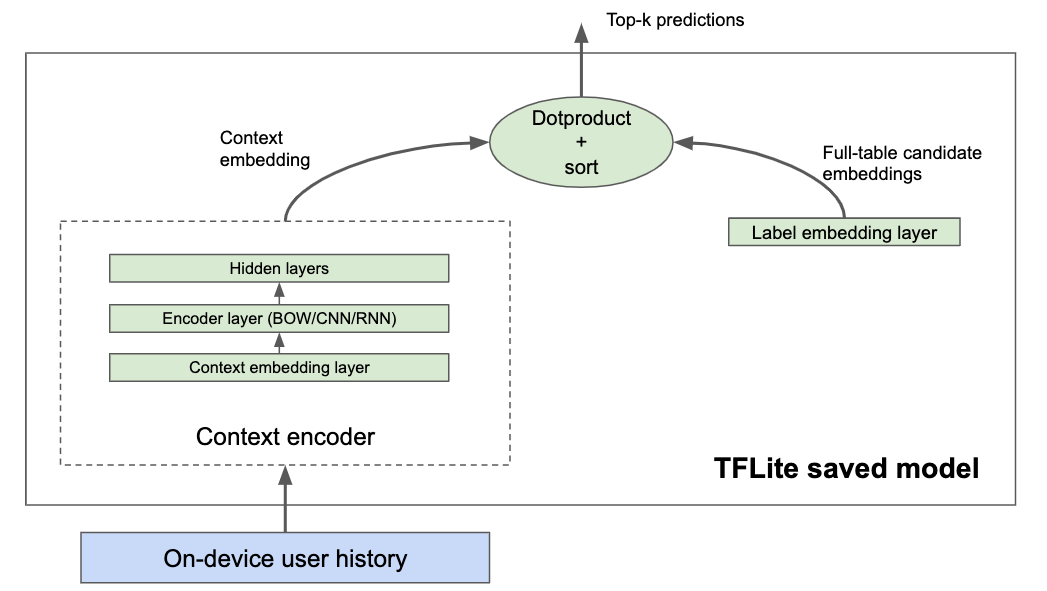 To demonstrate the quality and the user experience of an on-device recommendation model, we trained an example movie recommendation model using the MovieLens dataset and developed a demo app. (Both the model and the app are for demonstration purposes only.) The MovieLens 1M dataset contains ratings from 6039 users across 3951 movies, with each user rating only a small subset of movies. For simplification, we ignore the rating score, and train a model to predict which movies will get rated given N previous movies, where N is referred to as the history length.
The model’s performance on all the three encoders with different history lengths is shown below: 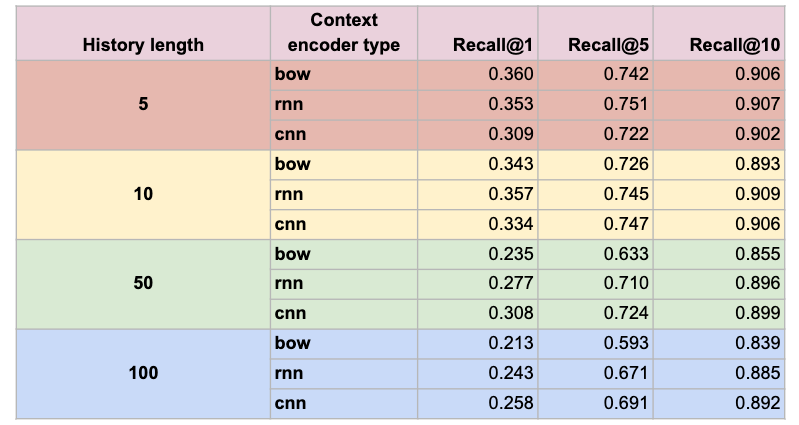 We can find that all models achieve high recall metric, while CNN and RNN models usually perform better for a longer history length. In practice, developers may conduct experiments with different history lengths and encoder types, and find out the best for the specific recommendation problem they want to solve.
We want to highlight that all the published on-device models have very low inference latency. For example, for the CNN model with N=10 which we integrated with our demo app, the inference latency on Pixel 4 phones is only 0.05ms in our experiment. As stated in the introduction, such a low latency allows developing immediate and smooth response to every user interaction on the phone, as is demonstrated in our app:

We welcome different kinds of extensions and contributions. The currently open sourced model does not support more than one feature column to represent each user’s activity. In the next version, we are going to support multiple features as the activity representation. Moreover, we are planning more advanced user encoders, such as Transformer-based (Vaswani, A., et al., 2017).