AWS DeepRacer is the fastest way to get rolling with machine learning (ML). It’s a fully autonomous 1/18th scale race car driven by reinforcement learning, a 3D racing simulator, and a global racing league. Throughout 2020, tens of thousands of developers honed their ML skills and competed in the League’s virtual circuit via the AWS DeepRacer console and 14 AWS Summit online events.

The AWS DeepRacer League’s 2020 season is nearing the final lap with the Championship at AWS re:Invent 2020. From November 10 through December 15, there are three ways to join in the racing fun: learn how to develop a competitive reinforcement learning model through our sessions, enter and compete in the racing action for a chance to win prizes, and watch to cheer on other developers as they race for the cup. More than 100 racers have already qualified for the Championship Cup, but there is still time to compete. Log in today to qualify for a chance to win the Championship Cup by entering the Wildcard round, offering the top 5 racers spots in the Knockout Rounds. Starting December 1, it’s time for the Knockout Rounds to start – and for racers to compete all the way to the checkered flag and the Championship Cup. The Grand Prize winner will receive a choice of either 10,000 USD AWS promotional credits and a chance to win an expenses-paid trip to an F1 Grand Prix in the upcoming 2021 season or a Coursera online Machine Learning degree scholarship with a maximum value of up to 20,000 USD. See our AWS DeepRacer 2020 Championships Official Rules for more details.

Watch the latest episode of DRTV news to learn more about how the Championship at AWS re:Invent 2020 will work.

Thanks to the thousands of developers who competed in the 2020 AWS DeepRacer League. Below is the list of our Virtual and Summit Online Circuit winners who qualified for the Championship at AWS re:Invent 2020. 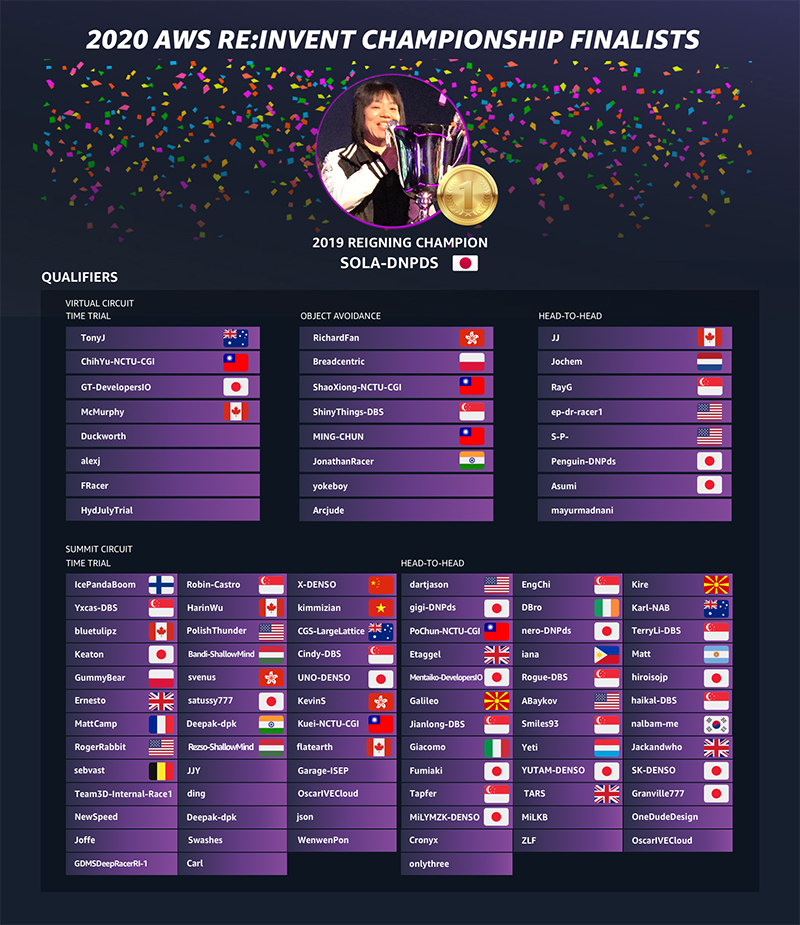 Last chance for the Championship: Enter the Wildcard

Are you yet to qualify for the Championship Cup this season? Are you brand new to the league and want to take a shot at the competition? Well, you have one last chance to qualify with the Wildcard. Through November, the open-play wildcard race will be open. This race is a traditional virtual circuit style time trial race, taking place in the AWS DeepRacer console. Participants have until 11:59pm UTC November 30 (6:59pm EST, 3:59pm PST) to submit their fastest model. The top five competitors from the wildcard race will advance to the Championship Cup knockout.

Don’t worry if you don’t advance to the next round. There are chances for developers of all skill levels to compete and win at AWS re:Invent, including the AWS DeepRacer League open racing and special live virtual races. Visit our DeepRacer page for complete race schedule and additional details.

Here’s an overview of how the Championships are organized and how many racers participate in each round from qualifying through to the Grand Prix Finale. 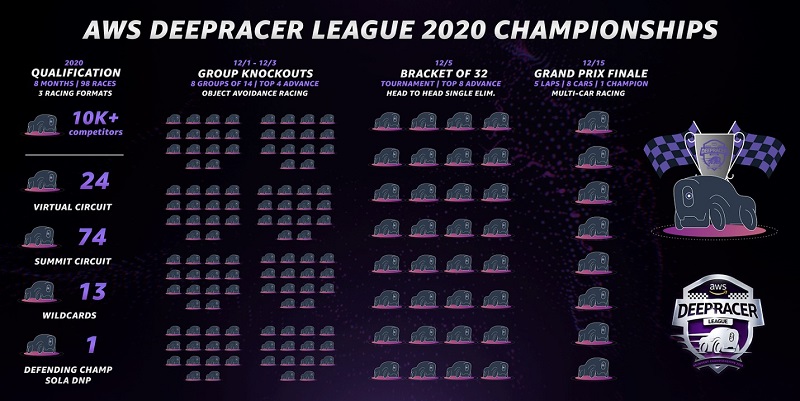 On December 1, racers need to be ready for anything in the championships, no matter what road blocks they may come across. In Round 1, competitors have the opportunity to participate in a brand-new live racing format on the console. Racers submit their best models and control maximum speed remotely from anywhere in the world, while their autonomous models attempt to navigate the track, complete with objects to avoid. They’ll have 3 minutes to try to achieve their single best lap to top the leaderboard. Racers will be split into eight groups based on their time zone, with start order determined by the warmup round (with the fastest racers from round 1 getting to go last in their group). The top four times in each group will advance to our bracket round. Tune in to AWS DeepRacer TV  throughout AWS re:Invent to catch the championship action.

The top 32 remaining competitors will be placed into a single elimination bracket, where they face off against one another in a head-to-head format in a five-lap race. Head-to-head virtual matchups will proceed until eight racers remain. Results will be released on the AWS DeepRacer League page and in the console.

The final race will take place before the closing keynote on December 15 as an eight-person virtual Grand Prix. Similar to the F1 ProAm in May, our eight finalists will submit their model on the console and the AWS DeepRacer team will run the Grand Prix, where the eight racers simultaneously face off on the track in simulation, to complete five laps. The first car to successfully complete 5 laps and cross the finish line will be crowned the 2020 AWS DeepRacer Champion and officially announced at the closing keynote.

More Options for your ML Journey

If you’re ready to get over the starting line on your ML journey, AWS DeepRacer re:Invent sessions are the best place to learn ML fast.  In 2020, we have not one, not two, but three levels of ML content for aspiring developers to go from zero to hero in no time! Register now for AWS re:Invent to learn more about session schedules when they become available.

You can take all the courses live during re:Invent or learn at your own speed on-demand. It’s up to you.  Visit the DeepRacer page at AWS re:Invent to register and find out more on when sessions will be available.

As you can see, there are many opportunities to up-level your ML skills, join in the racing action and cheer on developers as they go for the Championship Cup. Watch this page for schedule and video updates all through AWS re:Invent 2020!

Dan McCorriston is a Senior Product Marketing Manager for AWS Machine Learning. He is passionate about technology, collaborating with developers, and creating new methods of expanding technology education. Out of the office he likes to hike, cook and spend time with his family.