Reinforcement learning (RL) has been used successfully for solving tasks which
have a well defined reward function – think AlphaZero for Go, OpenAI Five for
Dota, or AlphaStar for StarCraft. However, in many practical situations you
don’t have a well defined reward function. Even a task as seemingly
straightforward as cleaning a room has many subtle cases: should a business
card with a piece of gum be thrown away as trash, or might it have sentimental
value? Should the clothes on the floor be washed, or returned to the
closet? Where are notebooks supposed to be stored? Even when these aspects of
a task have been clarified, translating it into a reward is non-trivial: if you
provide rewards every time you sweep the trash, then the agent might dump the
trash back out so that it can sweep it up again.1

Alternatively, we can try to learn a reward function from human feedback about
the behavior of the agent. For example, Deep RL from Human Preferences
learns a reward function from pairwise comparisons of video clips of the
agent’s behavior. Unfortunately, however, this approach can be very costly:
training a MuJoCo Cheetah to run forward requires a human to provide 750
comparisons.

Instead, we propose an algorithm that can learn a policy without any human
supervision or reward function, by using information implicitly available in
the state of the world. For example, we learn a policy that balances this
Cheetah on its front leg from a single state in which it is balancing.

Learning preferences by looking at the world

Humans seem to infer what other people want without needing much explicit
supervision. How do we do it? As a concrete example, let’s imagine that you
walk into a room, and you see this: 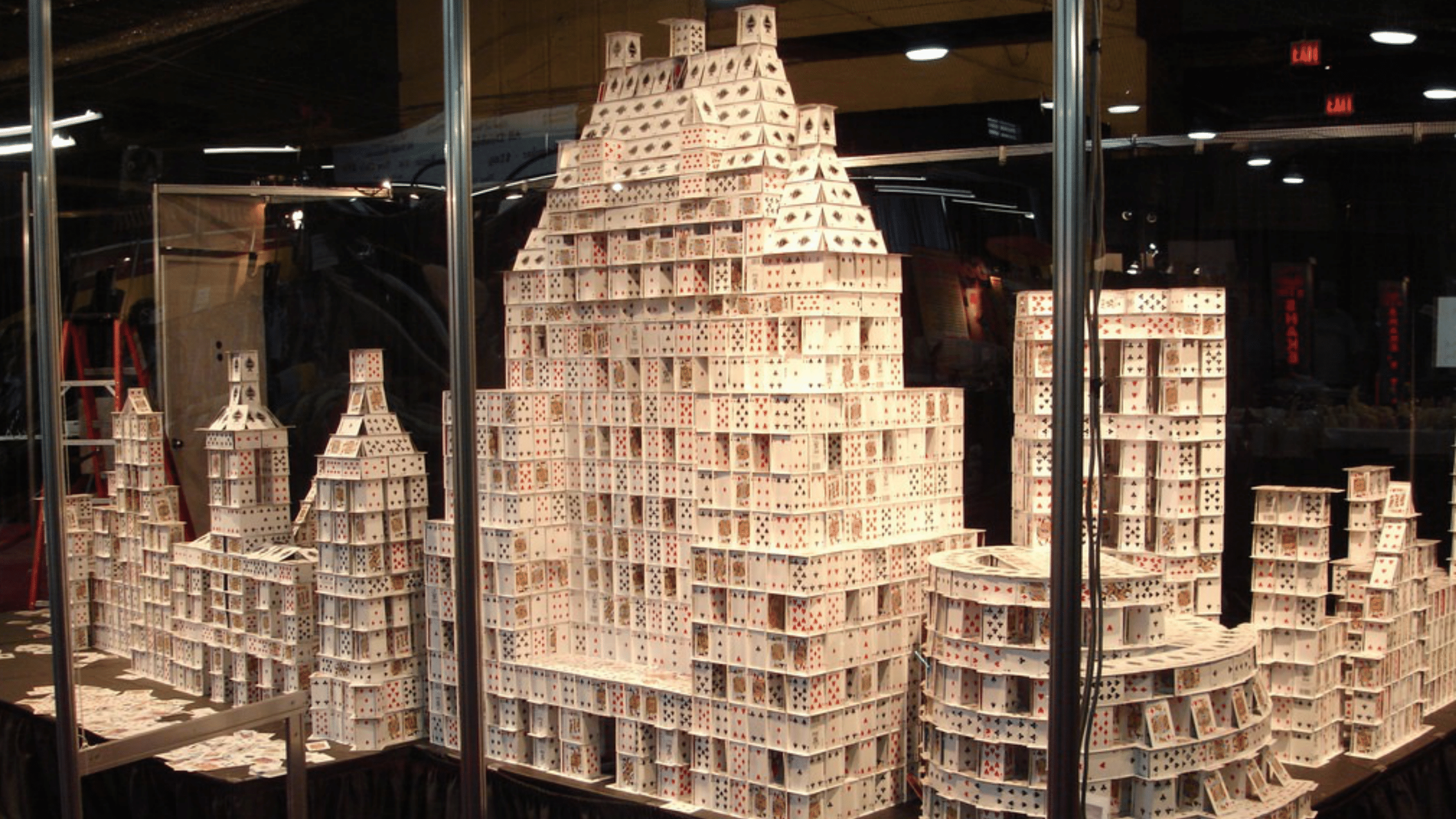 You’re probably going to immediately be a lot more careful, to ensure you don’t
knock down the elaborate house of cards.2 But how exactly did you know
that you shouldn’t knock it down? Presumably you’ve never encountered a
situation like this before, so it can’t be past experience. Nor can it be
“built-in priors” from evolution – our hunter-gatherer ancestors did not
routinely find giant houses of cards while foraging. No, the reason you know it
should not be knocked down is that someone has clearly put in a lot of effort
into making this house of cards – it certainly didn’t build itself – and they
wouldn’t have done so unless they really cared about it.

Preferences Implicit in the State of the World develops an algorithm,
Reward Learning by Simulating the Past (RLSP), that does this sort of
reasoning, allowing an agent to infer human preferences without explicit
feedback. As an example, consider the room environment below:

When the robot is deployed, Alice asks it to navigate to the purple door. If we
were to encode this as a reward function that only rewards the robot while it
is at the purple door, the robot would take the shortest path to the purple
door, knocking over and breaking the vase – since no one said it shouldn’t do
that. The robot is perfectly aware that its plan causes it to break the vase,
but by default it doesn’t realize that it shouldn’t break the vase.

RLSP can instead infer that the vase should not be broken. At a high level, it
effectively considers all the ways that the past could have been, checks which
ones are consistent with the observed state, and infers a reward function based
on the result. If Alice didn’t care about whether the vase was broken, she
would have probably broken it some time in the past. If she wanted the vase
broken, she definitely would have broken it some time in the past. So the only
consistent explanation is that Alice cared about the vase being intact. In
contrast, we would observe the same state regardless of Alice’s preferences
about carpets, and so RLSP does not infer anything about those preferences.

Unfortunately, this approach requires reasoning about all possible pasts, which
is intractable in even moderate environments. Prior work has only tested the
idea in very simple gridworld environments. What would it take to scale this
idea up to bigger, continuous environments, where we don’t have full knowledge
of the environment dynamics? Intuitively, it should still be possible to make
such inferences. Consider for example this Cheetah that is balancing on its
front leg. Just as before, we can reason that there are very few behaviors that
end up with the Cheetah in this particular state, and so the Cheetah “prefers”
to be balancing on one leg.

In our latest paper presented at ICLR 2021, we introduce Deep
Reward Learning by Simulating the Past (Deep RLSP), an extension of the RLSP
algorithm that can be scaled up to tasks like the balancing Cheetah task.

The key difficulty for scaling up RLSP to bigger environments is in how to
reason about “what must have happened in the past”. To address this, we
sample likely past trajectories, instead of enumerating all possible past
trajectories. In the case of the balancing Cheetah, we can infer that the
Cheetah must have followed a trajectory similar to the one shown here:

Model-based RL algorithms often simulate the future by rolling out a policy
$pi(a_t mid s_t)$ to choose actions and an environment dynamics model
$mathcal{T}(s_{t+1} mid s_t, a_t)$ to predict future states. Similarly, we
simulate the past by rolling out an inverse policy $pi^{-1}(a_t mid s_{t+1})$
that predicts which action $a_t$ the user took that resulted in the state
$s_{t+1}$, and an inverse environment dynamics model $mathcal{T}^{-1}(s_t mid
s_{t+1}, a_t)$ that predicts the state $s_t$ from which the chosen action $a_t$
would have led to $s_{t+1}$. By alternating between predicting past actions,
and predicting past states from which those actions were taken, we can simulate
trajectories arbitrarily far into the past.

Before we get into the details of how we train these models, let’s first
understand how we’re going to use the trained models to infer preferences from
an observed state $s_0$.

The RLSP algorithm uses gradient ascent to continuously update a linear reward
function to explain an observed state $s_0$. To scale this idea up we make two
key changes to their approach: (1) we learn a feature representation of each
state, and model the reward function as linear in these features, and (2) we
approximate the RLSP gradient by sampling likely past trajectories instead of
enumerating all possible past trajectories. See our paper for a detailed
discussion of the derivation.

This results in the Deep RLSP gradient estimator that aims to maximize the
likelihood of an observed state $s_0$ under a reward function defined with a
parameter vector $theta$:

The core of our algorithm is to perform gradient ascent using this gradient.
However, we need access to $phi$, $pi^{-1}$, $mathcal{T}^{-1}$, $pi$, and
$mathcal{T}$ to compute the gradient. We learn these models from an initial
dataset $mathcal{D}$ of environment interactions. Note that $mathcal{D}$ need
not involve any human input: in our experiments, we use rollouts of a random
policy to produce $mathcal{D}$. We can then learn the necessary models as
follows:

To test our algorithm, we applied it to tasks in the MuJoCo simulator. These
environments are commonly used to benchmark RL algorithms, and a typical task
would be to make simulated robots walk.

To evaluate Deep RLSP, we use RL to train policies that walk, run or hop
forward, and then sample a single state from these policies. Deep RLSP must
then use just that state to infer that it is supposed to make the simulated
robot walk forward. Note that this task is a little easier than it sounds
because the state information in MuJoCo not only contains joint positions, but
also velocities, so a single state also provides some information about how the
robot is moving.

Our experiments show that this works reasonably well. We tested it primarily
for a Cheetah robot and a Hopper robot, and in both cases it did in fact learn
to move forward. Of course, the learned policies don’t perform worse as well as
policies that are directly trained on the true reward function.

But the whole point of Deep RLSP is to learn in situations where we don’t
have a reward. So, as a more interesting test case, we used Deep RLSP to
imitate behaviors from a single state that are hard to explicitly specify in a
reward function. We generated a set of “skills” using an unsupervised skill
discovery algorithm called DADS, including the balancing skill that we saw
earlier. Again, we sampled a single state or a small number of states, and
checked whether Deep RLSP would learn to mimic the skill.

Since we don’t have access to a true reward function for “balancing”, we do not
have an obvious way to quantitatively evaluate the performance of Deep RLSP. We
instead looked at videos of the learned policies and judged them
qualitatively. For example, here is the original balancing Cheetah, alongside
the behavior learned by Deep RLSP using a single input state: 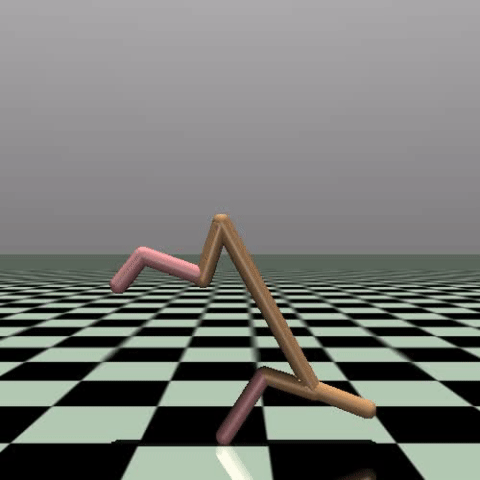 The behavior isn’t perfect – you can see that the head sometimes touches the
ground, and it doesn’t seem particularly good at balancing – but it has
clearly learned the broad outline of what should be done.

While our initial evaluation of Deep RLSP is promising, there is much remaining
work for learning preferences from the state of the world.

The main requirement for Deep RLSP to work well is to learn good models of the
inverse environment dynamics and inverse policy, and a good feature function.
In the MuJoCo environments we relied on simple representation learning for the
feature function and supervised learning for the models. This approach is
unlikely to work for much bigger environments or real-world robotics
applications. However, we are optimistic that advances in model-based RL can
directly be applied to this problem.

A second open question is how to learn preferences from the state of the world
in a multiagent setting. Typically the state will be optimized by one or more
humans, and we want a different robot to learn these preferences. Deep RLSP
currently learns the human’s reward and policy, but ultimately we want to use
that to inform the robot’s behavior. In our experiments, the “human” and
“robot” were the same, and so we could directly use the inferred policy as our
robot policy, but obviously this will not be the case in a realistic
application.

Finally, while we focused on imitation learning in this project, Deep RLSP is
also very promising for learning safety constraints, such as “don’t break the
vase”. We hope that the idea of learning preferences from the state of the
world will also be useful for applying RL in safety critical environments.

This post is based on the paper “Learning What To Do by Simulating the
Past”, presented at ICLR 2021. You can see our trained policies on
our website. We also provide code to reproduce our experiments
here.