Countless studies have found that “bias” – typically with respect to race and gender – pervades the embeddings and predictions of the black-box models that dominate natural language processing (NLP). For example, the language model GPT-3, of OpenAI fame, can generate racist rants when given the right prompt. Attempts to detect hate speech can itself harm minority populations, whose dialect is more likely to be flagged as hateful.

This, in turn, has led to a wave of work on how to “debias” models, only for others to find ways in which debiased models are still biased, and so on.

But are these claims of NLP models being biased (or unbiased) being made with enough evidence?

Consider the sentence “The doctor gave instructions to the nurse before she left.” A co-reference resolution system, tasked with finding which person the pronoun “she” is referring to1, may incorrectly predict that it’s the nurse. Does this incorrect prediction – which conforms to gender stereotypes that doctors are usually male – mean that the system is gender-biased? Possibly – but it may also make mistakes in the other direction with equal frequency (e.g., thinking “he” refers to a nurse when it doesn’t). What if the system makes gender-stereotypical mistakes on not one sentence, but 100, or 1000? Then we could be more confident in claiming that it’s biased.

In my ACL 2020 paper, “Measuring Fairness under Uncertainty with Bernstein Bounds”, I go over how, in the haste to claim the presence or absence of bias, the inherent uncertainty in measuring bias is often overlooked in the literature:

Although this problem can exist with any kind of model, we focus on a remedy for classification models in particular.

A bias estimate, made using a small sample of data, likely differs from the true bias (i.e., at the population-level). How can we express our uncertainty about the estimate? We propose a method called Bernstein-bounded unfairness that translates this uncertainty into a confidence interval2.

Let’s say we want to measure whether some protected group – that is legally protected due to an attribute such as race or gender – is being discriminated against by some classifier, relative to some unprotected group . They occur in the population with frequency respectively. We need

We want to choose these functions such that our bias metric of choice – which we call the groupwise disparity – can be expressed as the difference in expected cost borne by the protected and unprotected groups. Given a model that makes predictions for protected and for unprotected , we want to express the bias as:

If the protected group is incurring higher costs in expectation, it is being biased against. For example, if we want to determine whether a classifier is more accurate on the unprotected group , then we would set the cost function to be the 1-0 loss (1 for an incorrect prediction, 0 for a correct one). If has a lower cost on average then , then it would mean that the classifier is more accurate on .

For a desired confidence level , a dataset of examples, and the variance of the amortized groupwise disparity across examples, the confidence interval would be

If we set , we could claim with 95% confidence that the true bias experienced by the protected group lies in the interval , where is our bias estimate.

Why We Need Bigger Datasets

If we want to say with 95% confidence that a classifier is biased to some extent – but want to spend as little time annotating data as possible – we need to find the smallest such that . We can do this by working backwards from the formula for given above (see paper for details).

Let’s go back to our original example. Say we want to figure out whether a co-reference resolution system, tasked with matching pronouns to the nouns they refer to, is gender-biased or not. We have a dataset of 500 examples to test whether the model does better on gender-stereotypical examples (e.g., a female nurse) than non-gender-stereotypical examples (e.g., a male nurse). Since we are measuring the difference in accuracy, we set the cost function to be the 1-0 loss.

On this dataset, our bias estimate for a model we’re evaluating is . Is this enough to claim with 95% confidence that the model is gender-biased?

In this scenario . We assume that there are equally many stereotypical and non-stereotypical examples and that the variance is maximal, so .

With these settings, ; we would need a dataset of more than 11903 examples to claim with 95% confidence that the co-reference resolution system is gender-biased. This is roughly 3.8 times larger than WinoBias, the largest dataset currently available for this purpose. We could only use WinoBias if – that is, if the sample bias were almost twice as high. 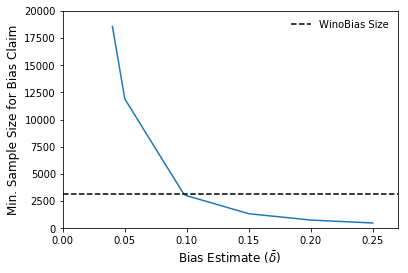 As seen above, the WinoBias dataset cannot be used to make claims of bias with 95% confidence unless the sample bias is egregiously high.

In the haste to claim the presence or absence of bias in models, the uncertainty in estimating bias is often overlooked in the literature. A model’s bias is often thought of as a single number, even though this number is ultimately an estimate and not the final word on whether the model is or is not biased.

We proposed a method called Bernstein-bounded unfairness for capturing this uncertainty using confidence intervals. To faithfully reflect the range of possible conclusions, we recommend that NLP practitioners measuring bias not only report their bias estimate but also this confidence interval.

What if we want to catch more subtle bias? Although it may be possible to derive tighter confidence intervals, what we really need are larger bias-specific datasets. The datasets we currently have are undoubtedly helpful, but they need to be much larger in order to diagnose biases with confidence.

Many thanks to Krishnapriya Vishnubhotla, Michelle Lee, and Kaitlyn Zhou for their feedback on this blog post.