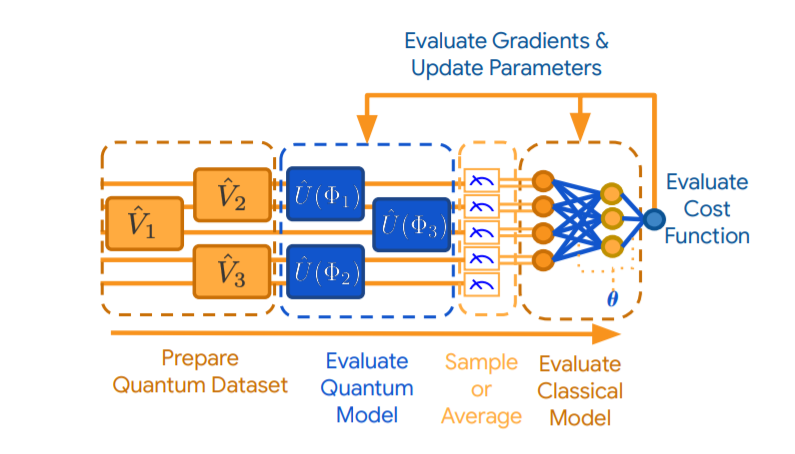 In this article I will be discussing some of the challenges I faced as a beginning researcher in quantum machine learning (QML) and how TensowFlow Quantum (TFQ) and Cirq enabled me and can help other researchers investigate the field of quantum computing and QML. I have previous experience with TensorFlow, which made the transition to using TensorFlow Quantum seamless. TFQ proved instrumental in enabling my work and ultimately my work utilizing TFQ culminated in my first publication on quantum reinforcement learning in the 16th AIIDE conference. I hope that this article helps and inspires other researchers, neophytes and experts alike, to leverage TFQ to help advance the field of QML.

QML has important similarities and differences to traditional neural network/deep learning approaches to machine learning. Both methodologies can be seen as using “stacked layers” of transformations that make up a larger model. In both cases, data is used to inform updates to model parameters, typically to minimize some loss function (usually, but not exclusively via gradient based methods). Where they differ is QML models have access to the power of quantum mechanics and deep neural networks do not. An important type of QML that TFQ provides techniques for is called variational quantum circuits (QVC). QVCs are also called quantum neural networks (QNN).

A QVC can be visualized below (from the TFQ white paper). The diagram is read from left to right, with the qubits being represented by the horizontal lines. In a QVC there are three important and distinct parts: the encoder circuit, the variational circuit and the measurement operators. The encoder circuit either takes naturally quantum data (i.e. a nonparametrized quantum circuit) or converts classical data into quantum data. This circuit is connected to the variational circuit which is defined by its learnable parameters. The parametrized part of the circuit is the part that is updated during the learning process. The last part of the QVC is the measurement operators. In order to extract information from the QVC some sort of quantum measurement (such as a Pauli X, Y, or Z basis measurements) must be applied. With the information extracted from these measurements a loss function (and gradients) can be calculated on a classical computer and the parameters can be updated. These gradients can be optimized with the same optimizers as traditional neural networks such as Adam or RMSProp. QVC’s can also be combined with traditional neural networks (as is shown in the diagram) as the quantum circuit is differentiable and thus gradients can be backpropagated through.

However, the intuitive models and mathematical framework surrounding QVCs have some important differences from traditional neural networks, and in these differences lies the potential for quantum speedups. Quantum computing and QML can harness quantum phenomena, such as superposition and entanglement. Superposition stems from the wavefunction being a linear combination of multiple states and enables a qubit to represent two different states simultaneously (in a probabilistic manner). The ability to operate on these superpositions, i.e. operate on multiple states simultaneously, is integral to the power of quantum computing. Entanglement is a complex phenomenon that is induced via multi-qubit gates. Getting a basic understanding of these concepts and of quantum computing is an important first step for QML. There are a number of great resources available for this such as Preskill’s Quantum Computing Course, and de Wolf’s lecture notes.

Currently, access to real quantum hardware is limited and as such, many quantum computing researchers conduct work on simulations of quantum computers. Near term and current quantum devices have 10s-100s of quantum bits (qubits) like the Google sycamore processor. Because of their size and the noise, this hardware is often called Noisy Intermediate Scale Quantum (NISQ) technology. TFQ and Cirq are built for these near term NISQ devices. These devices are far smaller than what some of the most famous quantum algorithms require to achieve quantum speedups given current error correction techniques; e.g. Shor’s algorithm requires upwards of thousands of qubits and the Quantum Approximate Optimization Algorithm (QAOA) could require at least 420 qubits for quantum advantages. However, there is still significant potential for NISQ devices to achieve quantum speedups (as Google demonstrated with 53 qubits).

My Work With TFQ

TFQ was announced in mid March this year (2020) and I began to use it shortly after. Around that time I had begun research into QML, specifically QML for reinforcement learning (RL). While there have been great strides in the accessibility of quantum circuit simulators, QML can be a difficult field to get into. Not only are there difficulties from a mathematical and physical perspective, but the time investment for implementation can be substantial. The time it would take to code QVCs from scratch and properly test and debug them (not to mention the optimization) is a challenge, especially for those coming from classical machine learning. Spending so much time building something for an experiment that has the potential to not work is a big risk – especially for an undergraduate student on a deadline! Thankfully I did not have to take this risk. With the release of TFQ it was easy to immediately start on the implementations of my ideas. Realistically, I would never have done this work if TFQ had not been released. Inspired by previous work, we expanded upon applying QML to RL tasks.

In our work we demonstrate the potential to use QVCs in place of neural networks in contemporary RL algorithms (specifically DQN and DDQN). We also show the potential to use multiple types of QVC models, using QVCs with either a dense layer or quantum pooling layers (denoted hybrid and pure respectively) to shrink the number of qubits to the correct output space.

The representational power of QVCs is also put on display; using a QVC with ~50 parameters we were able to achieve comparable performance to neural networks with orders of magnitude more parameters. See the graphs for a comparison of the reward achieved on the canonical CartPole environment (balancing a pole on a cart), the left graph includes all neural networks and the right shows only the largest neural network. The number in front of the NN represents the size of the parameter space.

We are continuing to work with QML applications to RL and have more manuscripts in submission. Continuation of this work has been accepted into the 2020 NeurIPS workshop: “The pre-registration experiment: an alternative publication model for machine learning research”.

Suggested use of TFQ

TFQ can be an incredible tool for anyone interested in QML research no matter your background. All too common in scientific communities is a ‘publish or perish’ mentality which can stifle innovative work and is prohibitive to intellectual risk taking, especially for experiments that require significant implementation efforts. Not only can TFQ help speed up any experiments you may have, but it also allows for easy implementation of ideas that would otherwise never get tested. Implementation is a common hindrance to new and interesting ideas, and far too many projects never progress out of the idea stage due to difficulties in transitioning the idea to reality, something TFQ makes easy.

For beginners, TFQ enables a first foray into the field without substantial time investment in coding and allows for significant learning. Being able to try and experiment with QVCs without having to build from the ground up is an incredible tool. For classical ML researchers with experience in TensorFlow, TFQ makes it easy to transition and experiment with QML at small or large scales. The API of TFQ and the modules it provides (i.e. Keras-esque layers and differentiators) share design principles with TF and their similarities make for an easier programming transition. For researchers already in the QML field, TFQ can certainly help.

In order to get started with TFQ it is important to become familiar with the basics of quantum computing, with either the references mentioned above or with any of the many other great resources out there. Another important step that often gets overlooked, is reading the TFQ white paper. The white paper is accessible to QML beginners and is an invaluable introduction to QML and the basic as well as advanced usage of TFQ. Just as important is to play around with TFQ. Try different things out, experiment; it is a great way to expand not only understanding of the software but of the theory and mathematics as well. Reading other contemporary papers and the papers that cite TFQ is a great way to become immersed with the current research going on in the field.