Figure 1 gives a simplified illustration of the AI performance profiling infrastructure at Meta. ML research and performance engineers submit through the User Portal a profiling request for a training job to the Profiling Service, which subsequently broadcasts the request to all the GPU hosts running the training job. When the Monitoring Daemon on a GPU host receives the profiling request, it will notify the Kineto GPU tracer (built on top of NVIDIA’s libcupti) inside the PyTorch program corresponding to the training job. As a result, Kineto traces will be collected and uploaded to the Object Store asynchronously (in more details: there is one Kineto trace collected for each individual GPU, each is treated and stored as a blob; an example will be given in Section 2). Meanwhile, MAIProf also collects a variety of aggregated performance metrics: the Monitoring Daemon on every GPU host continuously reads performance counters from NVIDIA’s DCGM/NVML and logs them to a Time Series DB.

Once both trace and metrics collections are completed, the Profiling Service will automatically download traces from the Object Store for trace analysis and performance metrics from the Time Series DB for metric analysis. Finally, an overall profiling report with detailed and insightful analysis is delivered to the user.

To serve production uses, we deliberately made the following design choices for MAIProf:

To be concrete, we use a case study on a protection PyTorch model used in production. First, we discuss our steps for identifying the performance bottlenecks in the model with MAIProf. Then we describe the corresponding optimizations applied and their impacts.

Inspect the CPU and GPU utilization on the same timeline, as shown in Figure 2. 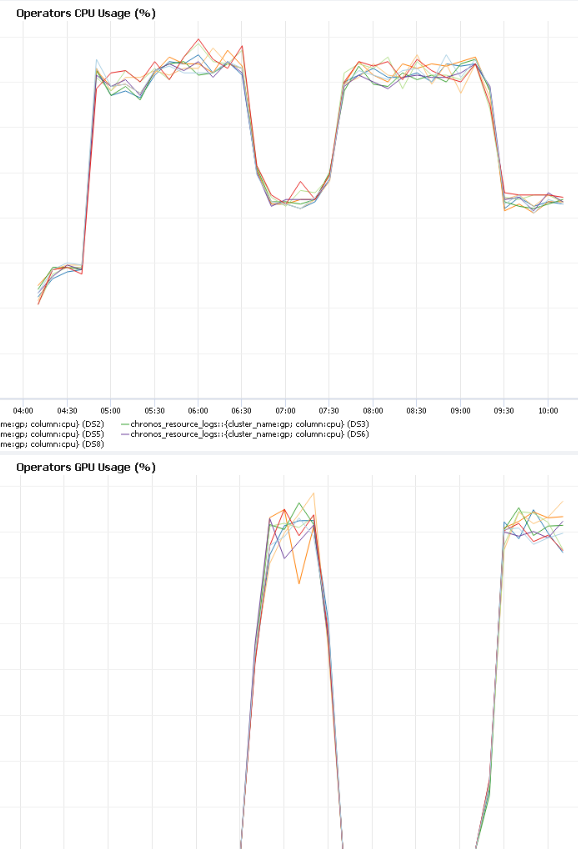 Collect a Python function call trace on the CPU with MAIProf while the GPU is idle, which is shown in Figure 3.

The Python trace shows that most of the CPU time is spent inside a Python function sharded_iterrows(). From the source code of the model, we learned that this function processes a big feature table in parallel. The number of worker threads used is controlled by a configurable parameter (num_worker_threads). Also, after investigating how the feature table is generated, we understood the performance anomaly: the training dataset is too large to fit in the CPU memory all at once; it needs to be broken into multiple sub-datasets, each has sufficient data for running 10 epochs. Consequently, a new sub-dataset needs to be read from the disk to memory every 10 epochs, during which the GPU is totally idle.

Collect GPU performance metrics, which is shown in Figure 4.

We made the following observations from Figure 4:

Collect a GPU trace (aka Kineto trace) of the training loop as shown in Figure 5.

Figure 5: A GPU trace (aka Kineto trace) of the training loop.

Since commonly used PyTorch functions are already annotated, their names are automatically shown on the trace. With them, we can roughly divide the trace into the four phases in a training iteration: (1) data loading, (2) forward pass, (3) backward pass, (4) gradient optimization (note: In Figure 5, the “optimizer” phase is from the previous batch while the other three phases are from the current batch).

We performed four simple optimizations that target the bottlenecks identified above, each requiring only a change in a config parameter or at most a few source lines. They are listed in Figure 6.

Performance tuning for PyTorch in production environments is increasingly important. A capable performance-debugging tool is a key to this process. We demonstrate with a case study on a production model that MAIProf is a powerful infrastructure for identifying optimization opportunities.

At Meta, MAIProf has been used by 100s of engineers, from performance novices to experts, to identify many more types of bottlenecks. These include slow data loading, small and/or slow GPU kernels, distributed training issues such as load imbalance and excessive communication. MAIProf covers major classes of models, including recommendation, vision, and natural language processing. In summary, it is now an indispensable tool for tuning the performance of production PyTorch workloads.