Computer vision has significantly advanced over the past decade thanks to large-scale benchmarks, such as ImageNet for image classification or COCO for object detection, which provide vast datasets and criteria for evaluating models. However, these traditional benchmarks evaluate passive tasks in which the emphasis is on perception alone, whereas more recent computer vision research has tackled active tasks, which require both perception and action (often called “embodied AI”).

The First Embodied AI Workshop, co-organized by Google at CVPR 2020, hosted several benchmark challenges for active tasks, including the Stanford and Google organized Sim2Real Challenge with iGibson, which provided a real-world setup to test navigation policies trained in photo-realistic simulation environments. An open-source setup in the challenge enabled the community to train policies in simulation, which could then be run in repeatable real world navigation experiments, enabling the evaluation of the “sim-to-real gap” — the difference between simulation and the real world. Many research teams submitted solutions during the pandemic, which were run safely by challenge organizers on real robots, with winners presenting their results virtually at the workshop.

This year, Stanford and Google are proud to announce a new version of the iGibson Challenge on Interactive and Social Navigation, one of the 10 active visual challenges affiliated with the Second Embodied AI Workshop at CVPR 2021. This year’s Embodied AI Workshop is co-organized by Google and nine other research organizations, and explores issues such as simulation, sim-to-real transfer, visual navigation, semantic mapping and change detection, object rearrangement and restoration, auditory navigation, and following instructions for navigation and interaction tasks. In addition, this year’s interactive and social iGibson challenge explores interactive navigation and social navigation — how robots can learn to interact with people and objects in their environments — by combining the iGibson simulator, the Google Scanned Objects Dataset, and simulated pedestrians within realistic human environments.

New Challenges in Navigation
Active perception tasks are challenging, as they require both perception and actions in response. For example, point navigation involves navigating through mapped space, such as driving robots over kilometers in human-friendly buildings, while recognizing and avoiding obstacles. Similarly object navigation involves looking for objects in buildings, requiring domain invariant representations and object search behaviors. Additionally, visual language instruction navigation involves navigating through buildings based on visual images and commands in natural language. These problems become even harder in a real-world environment, where robots must be able to handle a variety of physical and social interactions that are much more dynamic and challenging to solve. In this year’s iGibson Challenge, we focus on two of those settings: 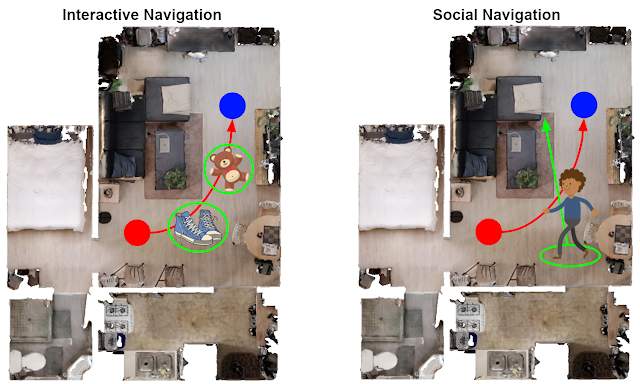 New Features of the iGibson 2021 Dataset
To facilitate research into techniques that address these problems, the iGibson Challenge 2021 dataset provides simulated interactive scenes for training. The dataset includes eight fully interactive scenes derived from real-world apartments, and another seven scenes held back for testing and evaluation.

To enable interactive navigation, these scenes are populated with small objects drawn from the Google Scanned Objects Dataset, a dataset of common household objects scanned in 3D for use in robot simulation and computer vision research, licensed under a Creative Commons license to give researchers the freedom to use them in their research.

The challenge is implemented in Stanford’s open-source iGibson simulation platform, a fast, interactive, photorealistic robotic simulator with physics based on Bullet. For this year’s challenge, iGibson has been expanded with fully interactive environments and pedestrian behaviors based on the ORCA crowd simulation algorithm.

Participating in the Challenge
The iGibson Challenge has launched and its leaderboard is open in the Dev phase, in which participants are encouraged to submit robotic control to the development leaderboard, where they will be tested on the Interactive and Social Navigation challenges on our holdout dataset. The Test phase opens for teams to submit final solutions on May 16th and closes on May 31st, with the winner demo scheduled for June 20th, 2021. For more details on participating, please check out the iGibson Challenge Page.

Acknowledgements
We’d like to thank our colleagues at at the Stanford Vision and Learning Lab (SVL) for working with us to advance the state of interactive and social robot navigation, including Chengshu Li, Claudia Pérez D’Arpino, Fei Xia, Jaewoo Jang, Roberto Martin-Martin and Silvio Savarese. At Google, we would like to thank Aleksandra Faust, Anelia Angelova, Carolina Parada, Edward Lee, Jie Tan, Krista Reyman and the rest of our collaborators on mobile robotics. We would also like to thank our co-organizers on the Embodied AI Workshop, including AI2, Facebook, Georgia Tech, Intel, MIT, SFU, Stanford, UC Berkeley, and University of Washington.