Machine learning models are susceptible to learning irrelevant patterns.
In other words, they rely on some spurious features that we humans know
to avoid. For example, assume that you are training a model to predict
whether a comment is toxic on social media platforms. You would expect
your model to predict the same score for similar sentences with
different identity terms. For example, “some people are Muslim” and
“some people are Christian” should have the same toxicity score.
However, as shown in 1, training a convolutional
neural net leads to a model which assigns different toxicity scores to
the same sentences with different identity terms. Reliance on spurious
features is prevalent among many other machine learning models. For
instance, 2 shows that state of the art models in object
recognition like Resnet-50 3 rely heavily on background, so
changing the background can also change their predictions .

Of course, we do not want our model to rely on such spurious features
due to fairness as well as  robustness concerns. For example, a model’s
prediction should remain the same for different identity terms
(fairness); similarly its prediction should remain the same with
different backgrounds (robustness). The first instinct to remedy this
situation would be to try to remove such spurious features, for example,
by masking the identity terms in the comments or by removing the
backgrounds from the images. However, removing spurious features can
lead to drops in accuracy at test time 45. In this
blog post, we explore the  causes of such drops in accuracy.

There are two natural explanations for accuracy drops:

One valid question to ask is whether removing spurious features leads to
a drop in accuracy even in the absence of these two reasons. We answer
this question affirmatively in our recently published work in ACM Conference on Fairness, Accountability, and Transparency (ACM FAccT) 11. Here, we explain our results.

Before delving into our result, we note that understanding the reasons
behind the accuracy drop is crucial for mitigating such drops. Focusing
on the wrong mitigation method fails to address the accuracy drop.

Before trying to mitigate the accuracy drop resulting from the removal of the spurious features, we must understand the reasons for the drop.

This work in a nutshell:

Over the last few years, researchers have observed some surprising
phenomena about deep networks that conflict with classical machine
learning. For example, training models to zero training loss leads to
better generalization instead of overfitting 12. A line
of work 1314 found that these unintuitive
results happen even for simple models such as linear regression if the
number of features are greater than the number of training data, known
as the overparameterized regime.

Accuracy drops due to the removal of spurious features is also
unintuitive. Classical machine learning tells us that removing spurious
features should decrease generalization error (since these features are,
by definition, irrelevant for the task). Analogous to the mentioned
work, we will explain this unintuitive result in overparameterized
linear regression as well.

Accuracy drop due to removal of the spurious feature can be explained in overparameterized linear regression.

Let’s first  formalize the noiseless linear regression setup. Recall
that we are going to study a setup in which the target is completely
determined by the core features, and the spurious feature is a single
feature that can be removed perfectly without affecting predictive
performance.  Formally, we assume there are (d) core features
(z in mathbb{R}^d) that determine the target (y in
mathbb{R}) perfectly, i.e., ( y = {theta^star}^top z).
In addition, we assume there is a single spurious feature (s) that
can also be determined by  the core features (s =
{beta^star}^top z). Note that the spurious feature can have
information about features that determine the target or it can be
completely unrelated to the target (i.e., for all (i),
(beta^star_i theta^star_i=0)).

We consider a setup where target ((y)) is a deterministic function
of core features ((z)). In addition, there is a spurious feature
((s)) that can also be determined by the core feature. We compare
two models, the core model that only uses (z) to predict (y) and the full model which uses both (z) and (s) to predict
(y).

In this setup, the mentioned two reasons that naturally can cause
accuracy drop after removing the spurious feature (depicted in the table
above)  do not exist.

In this simple setting, one might conjecture that removing the spurious
feature should only help accuracy. However, we show that this is not
always the case. We exactly characterize the test distributions that are
negatively affected by removing spurious features, as well as the ones
that are positively affected by it.

Generally, in the overparameterized regime, since the number of training
examples is less than the number of features, there are some directions
of data variation that are not observed in the training data. In this
example, we do not observe any information about the second and third
features.  The core model assigns weight (0) to the unseen
directions (weight (0) for the second and third features in this
example). However, the non-zero weight for the spurious feature leads to
a different assumption for the unseen directions. In particular, the
full model does not assign weight (0) to the unseen directions.
Indeed, by substituting (s) with ({beta^star}^top
z), we can view the full model as not using (s) but
implicitly assigning weight (beta^star_2=2) to the second
feature and (beta^star_3=-2) to the third feature (unseen
directions at training).

Let’s now look at different examples and the prediction of these two
models:

As we saw in the previous example, by using the spurious feature, the
full model incorporates ({beta^star}) into its estimate.  The
true target parameter ((theta^star)) and the true spurious
feature parameters (({beta^star})) agree on some of the
unseen directions and do not agree on the others.  Thus, depending on
which unseen directions are weighted heavily in the test time, removing
(s) can increase or decrease the error.

Drop in accuracy in test time depends on the relationship between the true target parameter ((theta^star)) and the true spurious feature parameters (({beta^star})) in the seen directions and unseen direction. 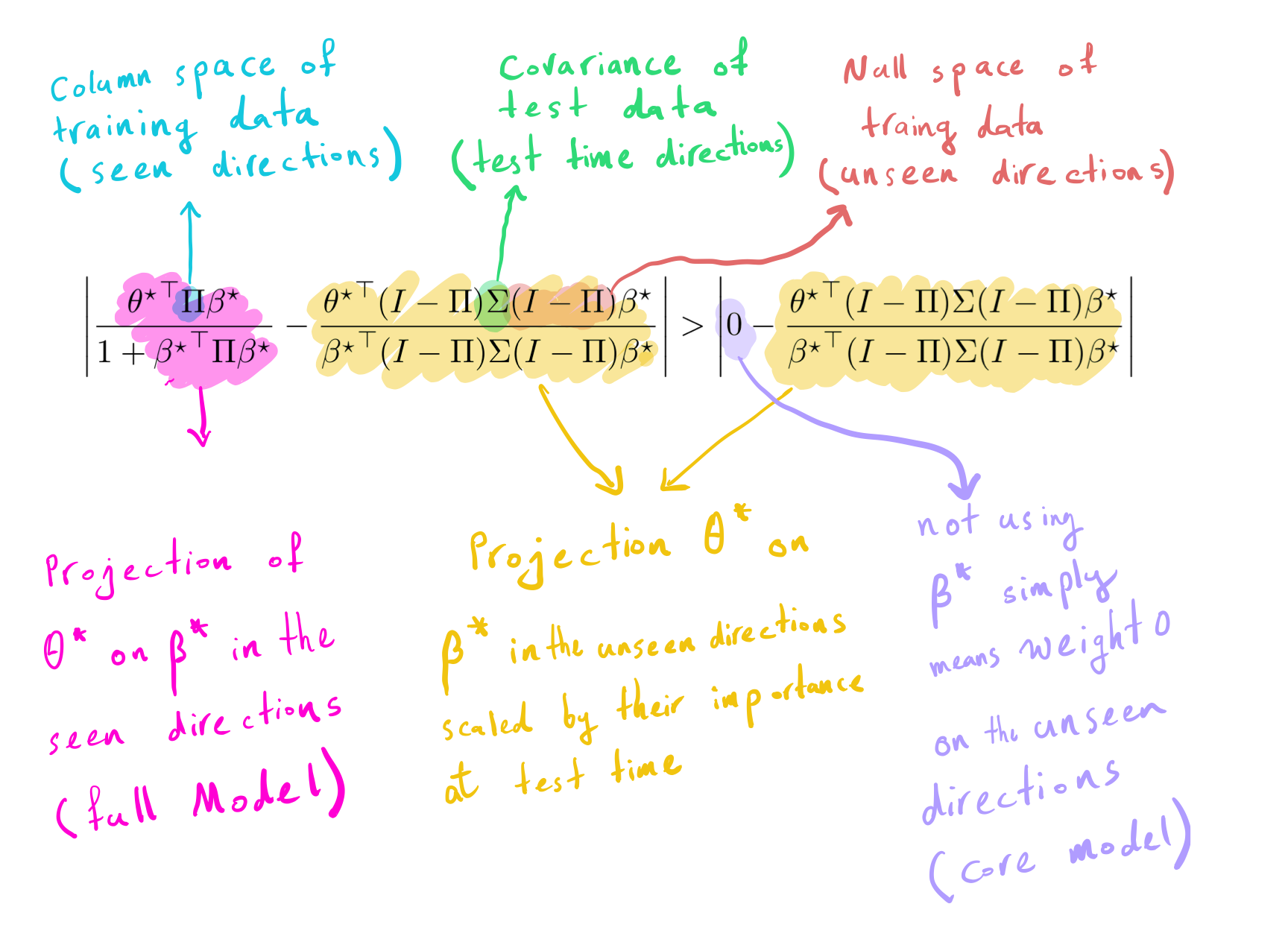 While the theory applies only to linear models, we now show that in
non-linear models trained on real-world datasets, removing a spurious
feature reduces the accuracy and affects groups disproportionately.

Datasets. We are going to study the CelebA dataset 16 which
contains photos of celebrities along with 40 different attributes.
footnote{See our paper for the results on the
comment-toxicity-detection and MNIST datasets} We choose wearing
lipstick (indicating if a celebrity is wearing lipstick) as the target
and wearing earrings (indicating if a celebrity is wearing earrings) as
the spurious feature.

Setup. We train a two-layer neural network with 128 hidden units. We
flatten the picture and concatenate the binary variable of wearing
earrings to it (we tuned a multiplier for it).  We also want to know how
much each model relies on the spurious feature. In other words, we want
to know how much the model prediction changes as we change the wearing
earrings variable. We call this attacking the model (i.e, swapping the
value of the binary feature of wearing earrings). We run each experiment
50 times and report the average. 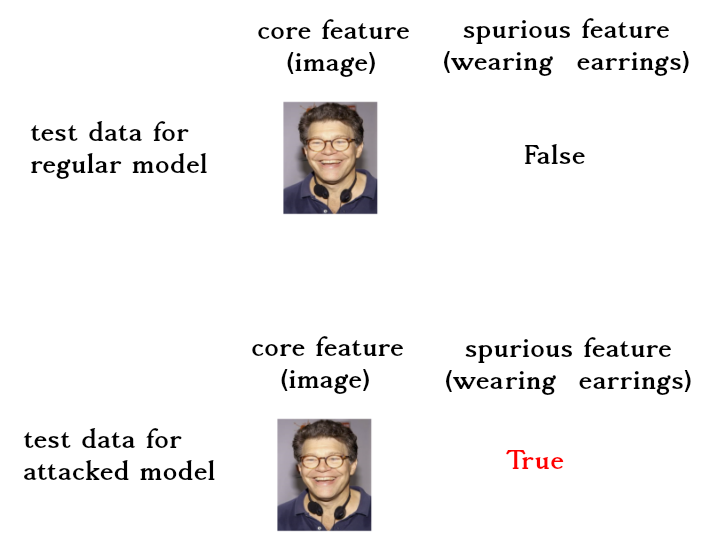 Results. The below diagram shows the accuracy of different models, and
their accuracies when they are attacked. Note that, because our attack
focuses on the spurious feature, the core model’s accuracy will remain
the same.

Removal of the wearing lipstick decreases the overall accuracy. The
decrease in accuracy is not monotonic among different groups. The
accuracy has decreased in the group where people are not wearing
lipstick or earrings and in the group that they both have lipstick and
earrings. On the other hand, accuracy increases for the group that only
wears one of them.

Let’s break down the diagram and analyze each section.

In this work, we first showed that overparameterized models are
incentivized to use spurious features in order to fit the training data
with a smaller norm. Then we demonstrated how removing these spurious
features altered the model’s assumption on unseen directions.
Theoretically and empirically, we showed that this change could hurt the
overall accuracy and affect groups disproportionately. We also proved
that robustness against spurious features (or error reduction by
removing the spurious features) cannot be guaranteed under any condition
of the target and spurious feature. Consequently, balanced datasets do
not guarantee a robust model and practitioners should consider other
features as well. Studying the effect of removing noisy spurious
features is an interesting future direction.

I would like to thank Percy Liang, Jacob Schreiber and Megha Srivastava for their useful comments. The images in the introduction are from 1718 1920.