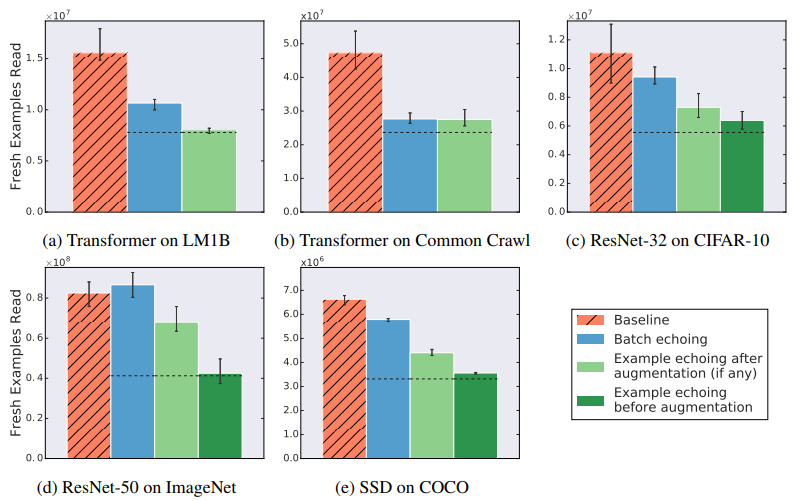 Over the past decade, dramatic increases in neural network training speed have made it possible to apply deep learning techniques to many important problems. In the twilight of Moore’s law, as improvements in general purpose processors plateau, the machine learning community has increasingly turned to specialized hardware to produce additional speedups. For example, GPUs and TPUs optimize for highly parallelizable matrix operations, which are core components of neural network training algorithms. These accelerators, at a high level, can speed up training in two ways. First, they can process more training examples in parallel, and second, they can process each training example faster. We know there are limits to the speedups from processing more training examples in parallel, but will building ever faster accelerators continue to speed up training?

Unfortunately, not all operations in the training pipeline run on accelerators, so one cannot simply rely on faster accelerators to continue driving training speedups. For example, earlier stages in the training pipeline like disk I/O and data preprocessing involve operations that do not benefit from GPUs and TPUs. As accelerator improvements outpace improvements in CPUs and disks, these earlier stages will increasingly become a bottleneck, wasting accelerator capacity and limiting training speed.

Consider a scenario where the code upstream to the accelerator takes twice as long as the code that runs on the accelerator – a scenario that is already realistic for some workloads today. Even if the code is pipelined to execute the upstream and downstream stages in parallel, the upstream stage will dominate training time and the accelerator will be idle 50% of the time. In this case, building a faster accelerator will not improve training speed at all. It may be possible to speed up the input pipeline by dedicating engineering effort and additional compute resources, but such efforts are time consuming and distract from the main goal of improving predictive performance. For very small datasets,one can precompute the augmented dataset offline and load the entire preprocessed dataset in memory, but this doesn’t work for most ML training scenarios.

In “Faster Neural Network Training with Data Echoing”, we propose a simple technique that reuses (or “echoes”) intermediate outputs from earlier pipeline stages to reclaim idle accelerator capacity. Rather than waiting for more data to become available, we simply utilize data that is already available to keep the accelerators busy.

Repeating Data to Train Faster
Imagine a situation where reading and preprocessing a batch of training data takes twice as long as performing a single optimization step on that batch. In this case, after the first optimization step on the preprocessed batch, we can reuse the batch and perform a second step before the next batch is ready. In the best case scenario, where repeated data is as useful as fresh data, we would see a twofold speedup in training. In reality, data echoing provides a slightly smaller speedup because repeated data is not as useful as fresh data – but it can still provide a significant speedup compared to leaving the accelerator idle.

There are typically several ways to implement data echoing in a given neural network training pipeline. The technique we propose involves duplicating data into a shuffle buffer somewhere in the training pipeline, but we are free to insert this buffer anywhere after whichever stage produces a bottleneck in the given pipeline. When we insert the buffer before batching, we call our technique example echoing, whereas, when we insert it after batching, we call our technique batch echoing. Example echoing shuffles data at the example level, while batch echoing shuffles the sequence of duplicate batches. We can also insert the buffer before data augmentation, such that each copy of repeated data is slightly different (and therefore closer to a fresh example). Of the different versions of data echoing that place the shuffle buffer between different stages, the version that provides the greatest speedup depends on the specific training pipeline.

Data Echoing Across Workloads
So how useful is reusing data? We tried data echoing on five neural network training pipelines spanning 3 different tasks – image classification, language modeling, and object detection – and measured the number of fresh examples needed to reach a particular performance target. We chose targets to match the best result reliably achieved by the baseline during hyperparameter tuning. We found that data echoing allowed us to reach the target performance with fewer fresh examples, demonstrating that reusing data is useful for reducing disk I/O across a variety of tasks. In some cases, repeated data is nearly as useful as fresh data: in the figure below, example echoing before augmentation reduces the number of fresh examples required almost by the repetition factor.

Reduction in Training Time
Data echoing can speed up training whenever computation upstream from accelerators dominates training time. We measured the training speedup achieved in a training pipeline bottlenecked by input latency due to streaming training data from cloud storage, which is realistic for many of today’s large-scale production workloads or anyone streaming training data over a network from a remote storage system. We trained a ResNet-50 model on the ImageNet dataset and found that data echoing provides a significant training speedup, in this case, more than 3 times faster when using data echoing.

Data Echoing Preserves Predictive Performance
Although one might be concerned that reusing data would harm the model’s final performance, we found that data echoing did not degrade the quality of the final model for any of the workloads we tested.

As improvements in specialized accelerators like GPUs and TPUs continue to outpace general purpose processors, we expect data echoing and similar strategies to become increasingly important parts of the neural network training toolkit.