AI is teaching cars to make better decisions, so could it do the same for surgeons?

Addressing that question is the mission of Theator, a startup based in Palo Alto, Calif., with an R&D site in Tel Aviv, that’s striving to fuel the nascent revolution in autonomous surgery.

Theator co-founder and Chief Technology Officer Dotan Asselmann said his company has been monitoring advances in self-driving cars as a blueprint for surgery, with a focus on using AI-driven analytics to improve decision-making.

Just as autonomous carmakers want to stop a vehicle before an accident, Theator wants to stop surgeries before any mistakes. And it’s doing this by analyzing video taken of surgeries being performed all over the world.

“Because it can scale, AI can acquire much more experience than any surgeon,” said Asselmann. “Our model has already analyzed thousands of surgeries that one individual physician would never have time to experience themselves.”

The problem Asselmann and the Theator team have identified is a lack of standardization in the surgical review process. Most surgeons learn their craft from just a few people. In fact, Asselmann said, many pick up the majority of their knowledge from their own experiences.

“Horizontal data sharing between surgeons has been limited — it’s mainly happened at conferences,” he said. “In today’s COVID reality, surgeons’ ability to expand their knowledge at scale is stifled.”

However, while the practice of conducting visually aided surgery has taken off and most operating rooms have been equipped with cameras that record procedures, surgeries are not routinely captured, stored or analyzed. This is what spurred Theator’s inception and has fueled its ongoing mission to harness AI and computer vision to power surgery.

The company’s technology is delivered through an edge appliance mounted on an operating room’s laparoscopic cart. From there, the NVIDIA Jetson AGX Xavier platform processes the videos, and Theator’s software anonymizes and then uploads them to its training environments in the Amazon and Azure clouds. 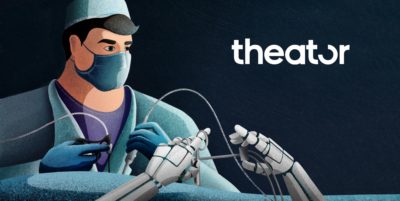 Once a video of a surgery has been processed, surgeons can immediately view highlight packages that focus on the select critical minutes where important decisions were made. Each procedure is added to Theator’s training dataset, thus expanding its models’ understanding.

By applying AI-driven analytics to the videos, Theator’s platform deconstructs the resulting data into steps, events, decisions and milestones. This allows surgeons to conduct post-surgery reviews, where they can compare parts of the procedure with previous identical procedures.

The platform can also use previous procedures to provide pre-operative assistance, and it can match videos to identify the cause of post-surgical complications. Future applications include the ability to predict, and potentially reduce, the need for costly and time-consuming interventions resulting from complications.

For example, a patient who develops a post-operative fever may have a bleed that has been left open. In the future, watching a Theator video summary could help a surgeon determine whether there was a problem before performing a scan or corrective procedure.

Asselmann believes that Theator can remove the cloud component from the equation and achieve the holy grail of real-time surgical support within a year or two – relying solely on its AI algorithms to conduct entire analytics processes on premises during minimally invasive surgery.

While the company’s focus is currently on aiding surgeons, he expects semi-autonomous surgery to be possible within the next five years. And while there will likely always be a surgeon in the loop, Asselmann believes level 3 or 4 automation for surgery will be utilized first and foremost in developing countries, where 5 billion people lack access to adequate surgical care.

Theator has reached this far with the help of NVIDIA Inception, an accelerator program for startups in the AI and data science fields. Asselmann credits the program with helping “increase our model training efficiency and reduce compute costs, while guiding the selection of the right hardware for our edge device.”

Through the NVIDIA Inception program, Theator was also provided a private demonstration of the NVIDIA Clara Guardian AI healthcare framework, as well as the NVIDIA DeepStream software development kit, which the startup used to build its high-efficiency real-time video pipeline.

Equipped with NVIDIA’s support, Theator can continue to bring critical context to the decisions surgeons are making every day in operating rooms all over the world.

“Surgeons are inundated with endless parameters flowing from multiple directions during surgery,” said Asselmann. “Our objective is to reduce the cognitive overload and aid them in making the optimal decision at the right time, for the right patient and circumstances.”

“You’ll still call the shots,” he says, “but you’ll be a much better surgeon with AI.”