It’s time to hail the new era of transportation.

During his keynote at the GPU Technology Conference today, NVIDIA founder and CEO Jensen Huang outlined the broad ecosystem of companies developing next-generation robotaxis on NVIDIA DRIVE. These forward-looking manufacturers are set to transform the way we move with safer, more efficient vehicles for everyday mobility.

The world moves 2 trillion miles a year. With some of those miles traveled through a mobility service, the opportunity for innovation is tremendous.

Robotaxis are fully autonomous vehicles that can operate without human supervision in geofenced areas, such as cities or residential communities. With a set of high-resolution sensors and a supercomputing platform in place of a driver, they can safely operate 24 hours a day, seven days a week.

And as a safer alternative to current modes of transit, robotaxis are expected to draw quick adoption once deployed at scale, making up more than 5 percent of vehicle miles traveled worldwide by 2030.

Achieving this mobility revolution requires centralized, high-performance compute. The amount of sensor data a robotaxi needs to process is 100 times greater than today’s most advanced vehicles. The complexity in software also increases exponentially, with an array of redundant and diverse deep neural networks running simultaneously as part of an integrated software stack.

NVIDIA is the only company that enables this level of AI development from end to end, which is why virtually every robotaxi maker and supplier is using its GPU-powered offerings.

Cruise, the San Francisco self-driving company, unveiled the Cruise Origin robotaxi in early 2020. The all-electric, self-driving, shared vehicle was purpose-built in partnership with GM and Honda to transform what it means to travel and commute in a city.

Cruise leverages the high-performance, energy-efficient compute of NVIDIA DRIVE GPUs to process the massive amounts of data its fleet collects on San Francisco’s chaotic streets in real time. The result is a safer, cleaner and more efficient transportation alternative for city dwellers.

“In a single day we ingest and process what would be equivalent to multiple Netflix libraries,” said Mo ElShenawy, senior vice president of engineering at Cruise during a GTC session. “With NVIDIA DRIVE GPUs, we’re able to use this data to catch our robotaxis up with human evolution.” In December, robotaxi maker Zoox took the wraps off its rider-focused autonomous vehicle. It features four-wheel steering, allowing it to pull into tight curb spaces without parallel parking. The vehicle is also bidirectional, so there is no fixed front or back end. It can pull forward into a driveway and forward out onto the road without reversing. In the case of an unexpected road closure, the vehicle can simply flip directions or use four-wheel steering to turn around. No reversing required.

Inside the vehicle, carriage seating facilitates clear visibility of the vehicle’s surroundings as well as socializing. Each seat has the same amount of space and delivers the same experience — there’s no bad seat in the house. Carriage seating also makes room for a wider aisle, allowing passengers to easily pass by each other without getting up or contorting into awkward positions. Zoox was able to optimize this robotaxi design with centralized, high-performance compute built on NVIDIA DRIVE.

“Working with NVIDIA, that’s allowed us to get a couple of orders more magnitude of computation done with the same amount of power, just over the last decade, and that makes a lot of difference,” said Zoox CTO Jesse Levinson during a GTC session.

The 100-vehicle AutoX fleet uses the NVIDIA DRIVE platform for AI compute, achieving up to 2,000 trillion operations per second to power the numerous redundant and deep neural networks for full self-driving. 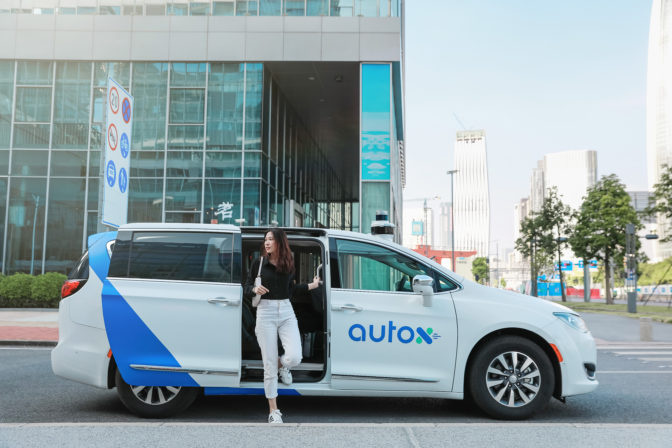 Based in the United Kingdom, Oxbotica has developed a “Universal Autonomy” platform that enables companies to build a variety of autonomous vehicles, including robotaxis. Its upcoming Selenium platform leverages NVIDIA DRIVE Orin to achieve level 4 self-driving capabilities. NVIDIA Inception member Pony.AI is collaborating with global automakers such as Toyota and Hyundai, developing a robotaxi fleet with the NVIDIA DRIVE AGX platform at its core. With the power of NVIDIA DRIVE, these robotaxi companies can continue to roll out this transformative technology to more consumers, ushering in a new age in mobility.