AWS DeepRacer is the fastest way to get started with machine learning (ML). You can train reinforcement learning (RL) models by using a 1/18th scale autonomous vehicle in a cloud-based virtual simulator and compete for prizes and glory in the global AWS DeepRacer League.

Over time, the value function helps us learn policies that increase the total reward. To learn the optimal or best policy, we balance the amount of time we spend exploring the environment versus the amount of time we spend exploiting what our policy has learned over time. For example, if we consider the “follow the center line” sample reward function, we first take random actions to explore the environment, meaning that our agent doesn’t do a very good job at staying in the center of the track. Over time, the agent learns which actions keep it near the center of the track, but if we keep taking random actions, it takes a long time to learn how to stay at the center of the track for the entire lap. So as the policy begins to learn the good actions, we begin to use those actions instead of taking random actions. However, if we always use or exploit the good actions, we never learn anything new because we fail to explore the environment. This trade-off is often referred to as the “exploration vs. exploitation” problem in RL.

Now that we have the fundamental RL concepts down, let’s look at how SAC works and how it compares to the other algorithm available on the AWS DeepRacer console, Proximal Policy Optimization (PPO).

There are three main differences between PPO and SAC. The first is that the implementation of SAC on the AWS DeepRacer console only allows you to select continuous action space (covered later in this post).

As mentioned earlier, exploration vs. exploitation is a key challenge in RL. To confront this issue, the PPO algorithm uses entropy regularization. Entropy regularization encourages the agent to explore by preventing it from settling on a specific policy.

Let’s once again use the “follow the center line” sample reward function. If we don’t have entropy regularization, after various training iterations we may end up with a policy that causes the agent to jitter around the center line. The jitter behavior occurs because the policy has a hard time deciding whether the best action is to stay forward or turn slightly left or right after making an observation of the environment. This behavior keeps us close to the center line, we just jitter around the center line by slightly turning left and right as the agent moves around the track. This means that this jitter policy has a high total reward because it keeps us close to the center line. The entropy of this policy is also relatively high, because the policy is unsure of what the best action is for a given observation of the environment.

Entropy maximization has one unique advantage: the algorithm tends to give up on policies that choose unpromising behavior. This happens because the polices produced by SAC for each training iteration choose actions that maximize total reward and entropy when observing the environment. This means that SAC policies tend to explore the environment more because high entropy means that we’re unsure which action to take. However, because we also maximize for total reward, we’re taking unsure actions as we observe the environment close to our desired behavior. SAC is an off-policy algorithm, which means we can use observations from policies produced from different training iterations. When we look at the observations of the previous policies, which have high entropy and therefore explore the environment more, the algorithm can pick out the promising behavior and give up on the unpromising behavior.

You can tune the amount of entropy to use in SAC with the hyperparameter SAC alpha, with a value between 0.0 and 1.0. The maximum value of the SAC alpha uses the whole entropy value of the policy and favors exploration. The minimum value of SAC alpha recovers the standard RL objective and there is no entropy bonus to incentivize the exploration. A good SAC alpha value to kick off your first model is 0.5. Then you can tune this hyperparameter accordingly as you iterate on your models.

The ins and outs of action spaces

The AWS DeepRacer console uses a neural network to model the policy learned by both PPO and SAC. The output of the policy is a discrete set of values. For discrete action spaces, which is what the PPO algorithm available on the AWS console has traditionally used, the discrete values returned from the neural network are interpreted as a probability distribution and are mapped to a set of actions. The set of actions is defined by the user by specifying the maximum steering angle, speed values, and their respective granularities to generate the corresponding combinations of speed and steering actions. Therefore, the policy returns a discrete distribution of actions.

For example, if we select a maximum steering angle of 15 degrees, a maximum speed of 1 m/s, and corresponding granularities of 3 and 1, our discrete action space has three values mapped to the following steering angle and speed pairs: (-15 degrees, 1 m/s), (0 degrees, 1m/s), and (15 degrees, 1m/s). A policy may return the following discrete distribution [0.50, 0.25, 0.25] for a given observation in the environment, which can loosely be interpreted as the policy being 50% certain that action 1, (-15 degrees, 1 m/s), is the action most likely to maximize total reward for a given observed state.

For continuous action space, the policy only outputs two discrete values. These values are interpreted to be the mean and standard deviation of a continuous normal distribution. You define a range for speed and steering angle. The action for an observed state is chosen from this user-defined range of speed and steering by sampling the normal distribution, defined by the mean and standard deviation returned from the policy.

In this section, we walk you through the steps to create a new vehicle in the My Garage section of the console with continuous action space. All you need to do is sign up for an AWS account (if you don’t already have one) and go to the AWS DeepRacer console:

In this example, we build a vehicle with stereo cameras. 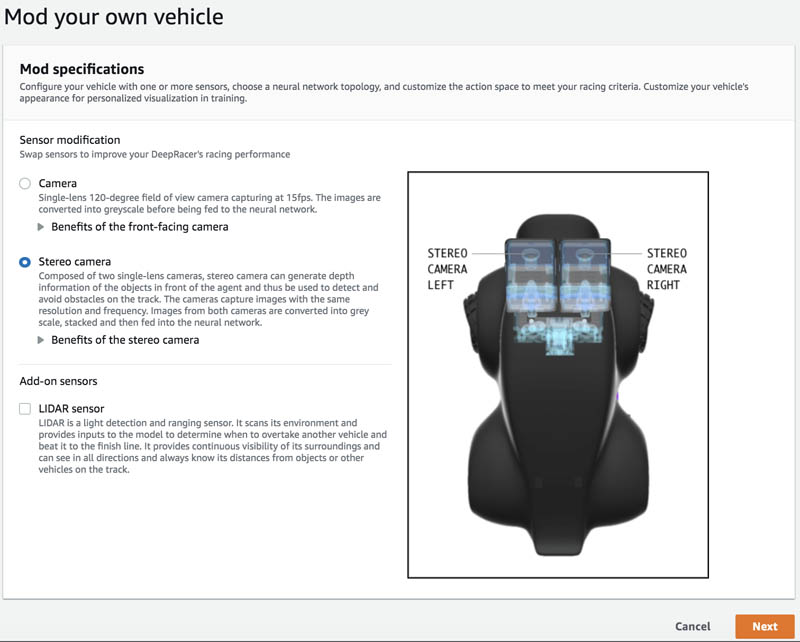 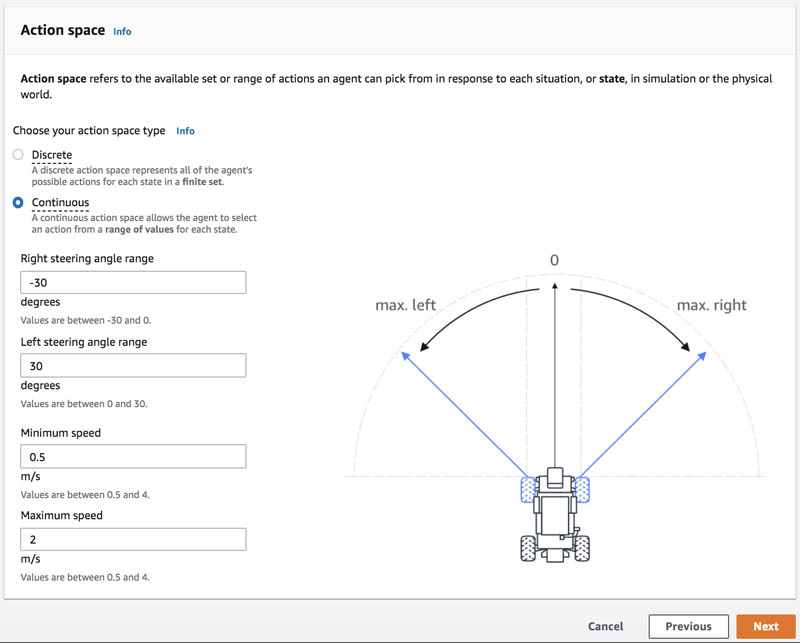 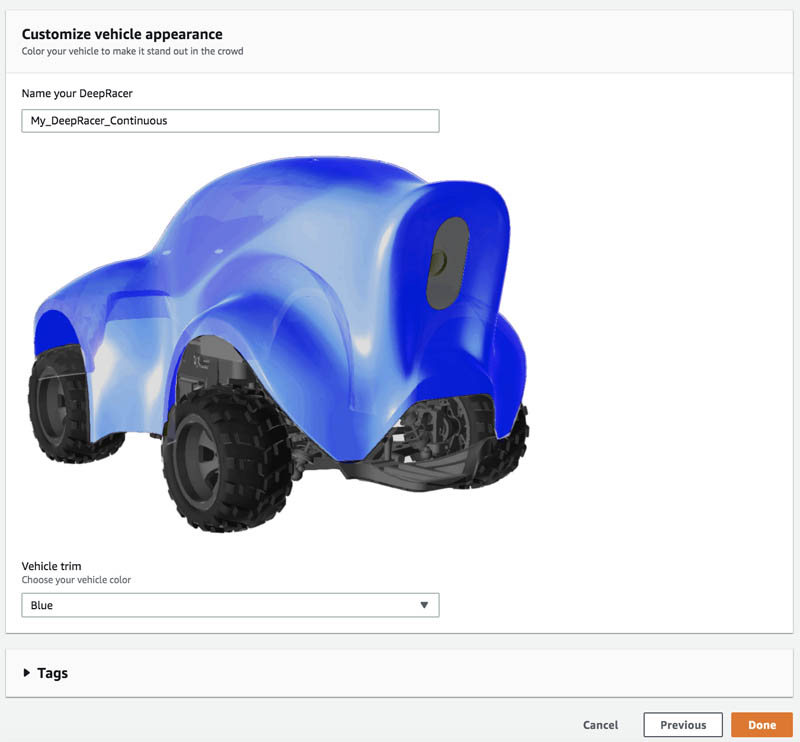 The vehicle is now available to choose when creating a model.

Training a Soft Actor Critic model on the console

In this section, we walk you through how to create new Soft Actor Critic model: 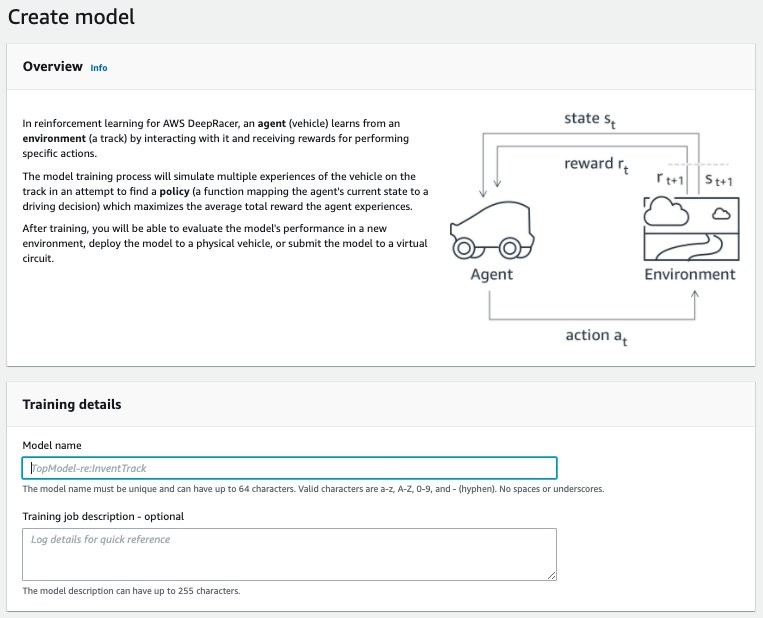 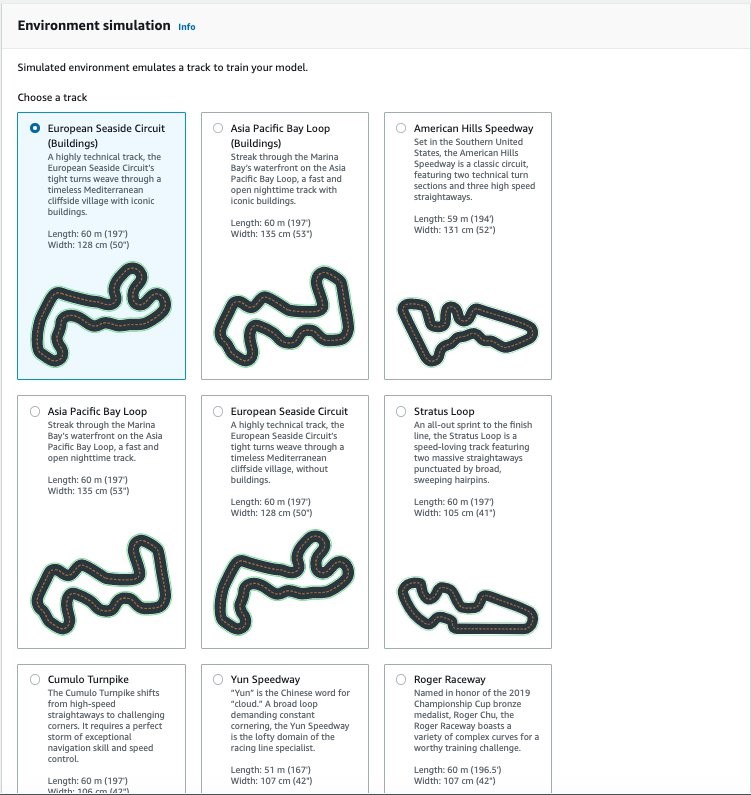 The next section allows you to customize the desired training environment, select an algorithm along with its hyperparameters, and choose the virtual car that contains your desired action spaces.

SAC Alpha is the hyperparameter that determines the relative importance of the entropy term against the reward. 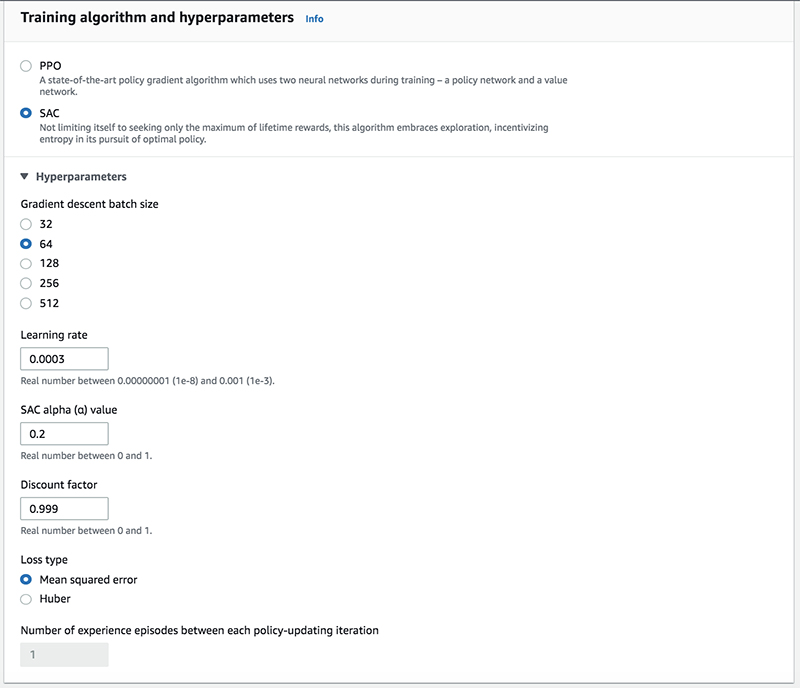 Lastly, you can write a reward function to guide the agent to your desired behavior and configure your desired time of training.

SAC is sensitive to the scaling of the reward signal, so it’s important to carefully tune the appropriate reward value. For small reward magnitudes, the policy may perform poorly because it’s likely to become uniform and fail to exploit the reward signal. For large reward magnitudes, the model learns quickly at first, but the policy quickly converges to poor local minima due to lack of exploration. So carefully tuning the right reward scaling is the key to training a successful SAC model.

When the training starts, the model dashboard shows the progress of training along with the live streaming of the simulator. 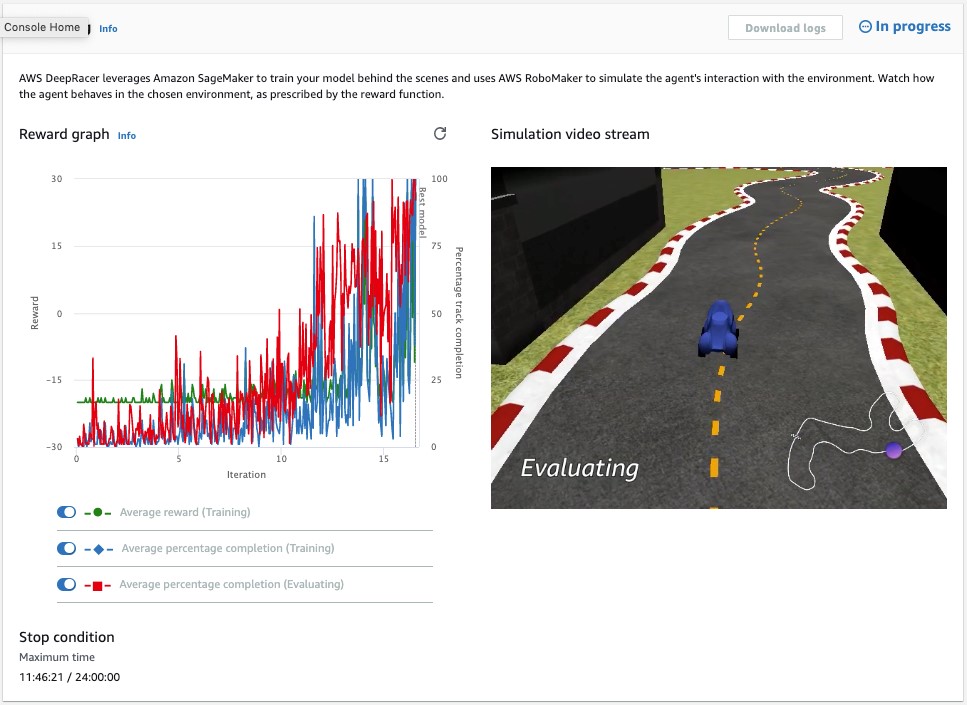 With AWS DeepRacer, you can now get hands-on experience with the Soft Actor Critic algorithm. Finding the right hyperparameters values, choosing appropriate action spaces, and writing your custom reward function are the keys to improving your SAC models.

You’re now ready to train your first SAC model. Sign in to the AWS DeepRacer console to get started.

Eddie Calleja is an SDM for AWS DeepRacer. He is the manager of the AWS DeepRacer simulation application and device software stacks. As a former physicist he spends his spare time thinking about applying AI techniques to modern day physics problems.